Update Required To play the media you will need to either update your browser to a recent version or update your Flash plugin.
By Mario Ritter
12 February, 2018


The president of the International Olympic Committee (IOC) has announced plans to visit North Korea after the PyeongChang Winter Olympics.

An IOC spokesman said Olympics chief Thomas Bach had agreed to the visit as part of the deal for North Korea to take part in the 2018 games. A date has yet to be set.

That visit would be the first by a South Korean leader to Pyongyang since Kim Jong Un became North Korea's leader in 2011.

Moon's office says he wanted to "create the environment for that to be able to happen."

The South Korean leader got the invitation from high-level North Korean officials, who were attending the winter Olympics. 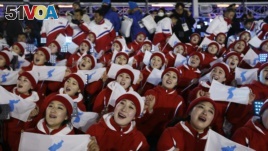 Members of the North Korean delegation hold flags of the combined Koreas before the opening ceremony of the 2018 Winter Olympics in Pyeongchang, South Korea, Feb. 9, 2018.

Over 400 North Koreans, including athletes and musicians, have gone to Pyeongchang in what some observers have termed a "charm offensive."

The North Korean actions have raised concerns that they could hurt a United States-led campaign of "maximum pressure" against the North. The North Korean leadership continues to face international sanctions because of its nuclear and missile activities.

At the same time, the recent contacts have raised hopes of increased diplomatic engagement between the two Koreas.

"It shows that North Korea is willing to improve the relationship between South and North Korea. We also believe it showed that they might take unprecedented drastic action if needed," he said.

The official did not say what "unprecedented drastic action" meant. But he said the goal of the contacts is to start denuclearization talks between the U.S. and North Korea.

Top officials from several countries sat together last Friday for the opening ceremonies of the 2018 Winter Olympics. They watched athletes of both North and South Korea march together under the white and blue "unification flag."

Pence did not greet or speak with either of the North Korean officials at the event.

Later, some news media criticized him for ignoring the North Koreans and not clapping during the entrance of the joint Korean team at the opening ceremony.

However, on Sunday, the U.S. official reportedly spoke to Moon about possible terms for engagement with North Korea, but he added that pressure would continue.

On his return to the United States, Pence reportedly said: "No pressure comes off until they are actually doing something that the alliance believes represents a meaningful step toward denuclearization."

Pence added that, while pressure would intensify, the U.S. government remained open to talks: "if you want to talk, we'll talk," he reportedly said.

North Korea experts have warned that the "charm offensive" is aimed at weakening U.S. ties with South Korea.

Robert Manning is an expert with the Atlantic Council, a public policy group based in Washington, D.C. He described the North Korean invitation as "a very clever move by Kim Jong Un to drive a big wedge" between the two allies.

Ken Gauswe is a director at the Center for Naval Analysis in the American state of Virginia. He noted that North Korea had secured economic aid from earlier inter-Korean meetings.

"If it leads to promises of aid, then it would definitely undermine the maximum pressure strategy," he said.

Bruce Klingner, a researcher for the Heritage Foundation in Washington agrees. He said Moon would risk violating United Nations Security Council sanctions if he offered notable aid in return for the North Korean efforts.

Some observers said that the latest developments have put the South Korean leader in a difficult situation.

"President Moon must balance his desire for North-South reconciliation with his policy of denuclearization," noted Manning.

U.S. Secretary of State Rex Tillerson said, during a trip to the Middle East, that it was too early to judge if diplomatic progress was taking place.

"It's really up to the North Koreans to decide when they're ready to engage with us in a sincere way, a meaningful way," he said.

Reuters reports that a South Korean official said that the government's position is that sanctions and pressure can be expected to continue. At the same time, talks with the North, involving both South Korea and the United States, should lead to the North's denuclearization.

Jong Su Oh and Brian Padden reported this story for VOA News. Mario Ritter adapted the reports for VOA Learning English. His story also has information from stories by Reuters and the Associated Press. George Grow was the editor.

charm – n. qualities that cause someone or something to be very likeable

sanctions – n. measures designed to cause a country to obey international law usually by limiting trade

maximum – adj. the most

engagement – n. the state of being involved in

unprecedented – adj. not having happened before

denuclearization – n. a process of giving up the possession of nuclear weapons

wedge – n. a tool used to split materials such as wood

reconciliation – n. the process of bringing two groups together that were in disagreement