Update Required To play the media you will need to either update your browser to a recent version or update your Flash plugin.
By Alice Bryant
21 April 2021


U.S. businesses are urging the Biden administration to aim to cut greenhouse gases by at least 50 percent below 2005 levels by 2030. The more than 300 businesses and investors include big companies such as Apple, Google, Microsoft and Coca-Cola.

The target would be nearly two times the nation's earlier goal and require major changes to the power, transportation and other industries. President Biden has promised to announce the 2030 goal before a virtual climate conference opens on April 22. 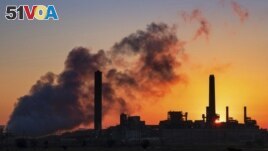 FILE - In this July 27, 2018, file photo, the Dave Johnson coal-fired power plant is silhouetted against the morning sun in Glenrock, Wyo.

In a letter to Biden, the businesses said the U.S. needs a "bold" target to reach a carbon-free future and create millions of well-paying jobs.

Investing in clean energy and clean transportation "can build a strong, more equitable and more inclusive American economy,″ they wrote. The letter was organized by We Mean Business, a group of companies that supports action to speed up a move to a carbon-free economy.

Several European lawmakers, business executives and union leaders also recently urged the U.S. to cut its greenhouse gases in half by 2030. They called for a cooperative alliance to fight climate change and work toward a low-carbon economy.

The letter from U.S. business leaders to the Democratic president comes as breaks are growing between corporate America and the Republican Party. Corporations have begun distancing themselves from Republican conspiracy theories and rejections of climate science, as well as the refusal to accept the 2020 election results.

Millions of Americans are already feeling the effects of climate change, the business leaders wrote to Biden. They noted the severe winter storm that caused electricity failures in Texas, deadly wildfires in California and record-breaking hurricanes in the South.

Biden brought the U.S. back into the Paris climate agreement and has made climate issues central to his presidency. But more action is needed, the business leaders wrote. An effective national climate plan "will require all of us,″ they added. The leaders noted that Biden alone can set the path by quickly "establishing a bold U.S. 2030 target.″

greenhouse gases – n. gases, such as carbon dioxide, that trap heat in the Earth's atmosphere

hurricane – n. an extremely large, powerful, and destructive storm with very strong winds that occurs especially in the western part of the Atlantic Ocean