Update Required To play the media you will need to either update your browser to a recent version or update your Flash plugin.
By John Russell
18 May, 2019


When Victor Vescovo reached a depth of 10,928 meters in the Pacific Ocean's Mariana Trench, he took 15 minutes to look at what surrounded him. He had just reached what is believed to be the deepest point a human has ever gone in the ocean.

He broke the record set by Oscar-winning director James Cameron. It was Cameron who suggested to Vescovo to stop and enjoy the moment. 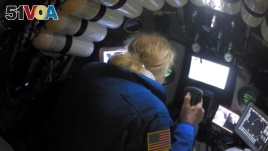 Undersea explorer Victor Vescovo pilots the submarine DSV Limiting Factor in the Pacific Ocean's Mariana Trench in an undated still image from video released by the Discovery Channel, May 13, 2019.

"I was stunned to discover when I did my research that of the five oceans, four had never actually had a visitation to their bottoms," Vescovo said. "I thought it was about time that someone actually did that."

Vescovo traveled down in a vehicle called the SDV Limiting Factor, a titanium craft outfitted with high definition cameras.

Patrick Lahey is with Triton Submarines, the company that made the SDV. He said such operations show why more exploration of the oceans is important for science.

"I think it's important for us human beings to study these areas," he said, noting how little is known about large parts of the ocean. "The ocean is the life force of our planet," he added.

Vescovo said that he believed he found many new species on the dive. He said the scientific group of the operation is excited and happy with what he brought to the surface for more examination. "It's really great," he added.

In addition to unusual animals, Vescovo saw something familiar – waste, especially plastic, in the deepest part of the water. Andy Sharpness leads Oceana, an environmental group. He called the discovery of waste materials there, "disturbing but not surprising."

Nekesa Mumbi Moody reported on this story for the Associated Press. John Russell adapted it for Learning English. Caty Weaver was the editor.

stun – v. to surprise or upset (someone) very much

actually – adv. used to stress that a statement is true especially when it differs in some way from what might have been thought or expected

disturbing – adj. – worrying, upsetting; from the verb disturb - to worry or upset (someone)