Update Required To play the media you will need to either update your browser to a recent version or update your Flash plugin.
By VOA
02 June, 2018

Life was not easy when Emma Seguy first arrived in Mesa, Arizona.

The 20-year-old was born in Paris, France. But when she was 16, she decided she wanted to be more independent and to try something new.

So, Seguy asked her parents if she could complete her final year of high school in the United States. At first, they resisted the idea. She had never been that far from them before. But, in the end, she says, they saw how important it was to her and agreed to let her go.

"It was hard for my parents; I mean, seeing their 16 year-old leave the country. But I think my parents are very proud of me for being here."

In 2014, Seguy applied to study at an American high school through the French group, International Student Programs Agency, and the American organization, Educatius. These two international education exchange programs placed her at Dobson High School in Mesa, Arizona. 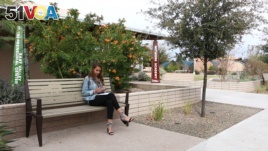 Right away, Seguy noticed major differences between life in Mesa and life in Paris. For example, she says people in Arizona are far less likely than Parisians to judge people based on their appearance.

But Seguy also experienced some major difficulties. Her English language skills were not as strong as she had hoped, and she missed her family much more than she thought she would.

She spent many nights crying and reading an English dictionary.

But luckily for Seguy, her exchange programs had also connected her with an American "host" family. These total strangers opened their home to Seguy while she completed her high school education. They also provided her with emotional support and did their best to help her succeed in her studies.

Seguy and her host family grew very close. She says they became like a second family to her. She also made some American friends in her French class at Dobson by helping them learn her native language.

Seguy says her ties to her new family and school friends became so strong that she decided not return home after graduation. Instead she chose stay in her newfound community while seeking higher education at Mesa Community College in 2015.

"It was supposed to be only for 10 months. And I ended up staying with them for three years, and they are still a big part of my life."

Mesa Community College is a public school established in 1963. It serves about 20,400 full and part-time students. Most seek two-year associate's degrees.

Community colleges are lower cost than other schools. And cost was a major issue Fabrice Hampoh faced when he first considered international study. The 23-year-old is from the town of Bonoua in the Ivory Coast, and his family does not have much money.

Hampoh began his higher education at the Universite de Cocody, where he sought a bachelor's degree in sociology in 2014. But he says he had always dreamed of studying in the United States, although he lacked the finances to do so.

Then, during a visit to the U.S. embassy in his home country, Hampoh learned of a special U.S. State Department program. The program is called the Community College Initiative, or CCI.

The CCI connects international students with community colleges around the U.S. It places students at one of these schools and lets them study there for free for up to a year. It also gives the students a little extra money to cover their travel and living costs. So in 2017, Hampoh applied to the CCI program, got accepted and was sent to Mesa.

At first, Hampoh's mother was worried about him being on his own. She did not want him to go. But he was able to persuade her that the program would offer him experiences he could not have otherwise. And, he argued, like Emma Seguy, he would have a support system waiting for him upon arrival.

The CCI program connects international students with host families. And Hampoh quickly grew close to his. They treated him like he was their real son, he says. And, they taught him how to survive in a foreign country.

The CCI program requires students to complete 100 hours of volunteer service during their stay. Hampoh's host family immediately asked him to join in their own volunteer projects. One is a program that helps disadvantaged young Americans go to college. The other sends solar panel technology to Afghanistan.

"When I came here...I didn't know how to swim and he is actually the one who taught me from scratch how to swim. Now I'm like a fish."

The young Ivorian says he will never forget these lessons, even after he returns home to complete his studies.

Emma Seguy completed her associate's degree program at Mesa last year. But after graduating, she decided she loved her second home so much that she wanted stay even longer. So she applied to a special program called Optional Practical Training, or OPT. Under OPT, international students with an F-1 visa can work in the U.S. for up to one year in a field related to their studies.

Seguy says she has loved teaching since she was young, helping her little sister with her studies. She was especially interested in helping students with disabilities, as she has a disabled aunt. So, working in special education at Roosevelt Elementary School in Mesa was a natural choice for her, under the OPT program.

It is very common for community college graduates in the U.S. to continue their educations at four-year colleges and universities. Seguy plans to seek a bachelor's degree at Arizona State University in the fall. After that she plans on returning to France.

But, like Fabrice Hampoh, she says the family that chose to host her, and made her feel so welcome, will never be far from her heart.

Pete Musto reported this story for VOA Learning English. Caty Weaver was the editor. We want to hear from you. How common is it for families to act as hosts for foreigners and international students in your country? How long do you think it takes for strangers to build strong connections? Write to us in the Comments Section or on 51VOA.COM.

applied – v. asked formally for something, such as a job, admission to a school or a loan, usually in writing

associate's degree(s) – n. a degree that is given to a student who has completed two years of study at a junior college, college, or university in the U.S.

finances – n. money available to a government, business, or person

disadvantaged – adj. lacking the things, such as money and education, that are considered necessary for an equal position in society

from scratch – idm. from a point at which nothing has been done yet

disabilities – n. conditions, such as an illness or an injury, that damage or limit a person's physical or mental abilities