Update Required To play the media you will need to either update your browser to a recent version or update your Flash plugin.
By Bryan Lynn
20 February, 2018


The Olympic women's hockey team made up of players from North and South Korea has ended its historic run at the Winter Games.

Team Korea lost to Sweden 6-1 Tuesday in its last game in PyeongChang, South Korea. The joint team included 23 players from South Korea and 12 from the North.

It was the fifth straight loss for the unified Korean team during the 2018 Olympics. Although the team lacked wins on the ice, many Olympic watchers felt the players still won a symbolic victory.

Thousands of people watched the team's final performance against Sweden. After the competition, they cheered for the Koreans one last time. Many also waved Korean unification flags as a sign of support. Before leaving the ice, the team skated around Kwandong Hockey Centre to thank supporters.

South Korean forward Kim Heewon wiped away tears as she and her teammates waved to cheering fans. 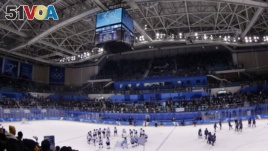 Fans cheer the combined Koreas team after the classification round of the women's hockey game against Sweden at the 2018 Winter Olympics in Gangneung, South Korea, Tuesday, Feb. 20, 2018. Sweden won 6-1. (AP Photo/Frank Franklin II)

Randi Heesoo Griffin is an American hockey player whose mother is Korean. She has played with the South Korean team and was a member of the joint Korean Olympic team. She said it was a "special" experience getting to know the North Korean players, and that they would be missed by the South Korean team.

But she said it may be difficult keeping in touch. "I mean, none of them have Facebook, so it might be hard," Griffin said. "But there were definitely bonds that were formed. And I think if we end up playing against each other again - South Korea vs. North Korea - there's definitely going to be some hugs and some smiles."

Women's hockey was the only sport at the 2018 Olympics with a team made up of players from both Koreas. The two nations have remained technically at war since a truce was declared in the 1950-53 Korean conflict.

The two governments bar their citizens from visiting each other's country and exchanging phone calls, letters and emails.

Officials from both Koreas made the decision to create a joint Korean team just days before the PyeongChang Games began. The decision came during a last-minute attempt to improve ties after a year of rising nuclear tensions led to fears of possible war on the Korean Peninsula.

The team's coach, Sarah Murray, is a Canadian citizen. She said that, since the decision to add the North Koreans came so suddenly, the combined team had very few chances to practice.

"With everything that happened to them, prior to the Olympics, for them to come together like this and compete like this in the Olympics, it's remarkable," Murray said Tuesday.

Before the team formed, some people questioned whether the North and South Korean players would work well together. But the team was seen getting along well during the competition.

The two Koreas had held talks in the past to possibly form joint teams for several Olympics, but no agreements were ever made. The fact that it finally happened in 2018 became a big story in the media coverage of the Games.

But it was not the first time in history that countries divided by war teamed up on joint Olympic teams.

During this period after World War II, there was a lot of mistrust between the two German states. West Germany was a democracy with support from the United States and Western Europe. East Germany had a Communist form of government and was allied with Russia and other East European nations.

After the two sides agreed to compete together at the Olympics in 1956, the head of the International Olympic Committee, or IOC, declared a political victory. "We have obtained in the field of sport what politicians have failed to achieve so far," IOC president Avery Brundage said.

But several disputes regarding details of the joint team proved difficult to resolve. These included differences over a unified flag and debate about which country's national anthem to use. Eventually, the IOC helped the two sides reach agreement on those issues.

Later, the team faced issues when the United States refused to approve visas for several East German team members seeking to compete in the 1960 Winter Games in Squaw Valley, California. At the time, the U.S. did not have diplomatic relations with East Germany.

The building of the Berlin Wall in 1961 complicated the East-West German relationship. West Germany began denying visas to East German Olympians and West German athletes were not permitted to travel to the East.

The two Germanys competed together for the last time at the 1964 Summer Olympics in Tokyo.

Then in 1968, East Germany and West Germany began sending separate teams to the Olympics after the IOC recognized the East's national Olympic committee.

Bryan Lynn wrote this story for VOA Learning English, based on reports from the Associated Press, Reuters and other sources. Ashley Thompson was the editor.

hug – n. the putting of your arms around someone and holding them tightly

smile – n. a happy or friendly expression in which the corners of a person's mouth curve up

achieve – v. to succeed in doing something, usually by working hard

national anthem – n. song that praises a country and that is officially accepted as that nation's song

tears – n. drops of clear, salty liquid secreted from glands in a person's eye when they cry or when the eye is irritated.