Update Required To play the media you will need to either update your browser to a recent version or update your Flash plugin.
By VOA
15 September, 2014


About 30 countries have promised to support Iraq in its fight against Islamic State militants by "all means necessary," including military aid.

Delegates met in Paris. They are continuing efforts to build a coalition to fight the Islamic State group. The group has taken control of large areas in northern and western Iraq and in eastern Syria.

French President Francois Hollande led the conference of 30 nations and the United Nations, the European Union and the Arab League. Mr. Hollande told the gathering that there was "no time to lose." 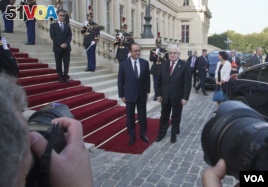 Mr. Kerry said several Arab nations offered to give military aid and carry out airstrikes, if needed. Syria and Iran were not invited to the meeting. And Russian officials said that any expanded airstrike into Syria would require a U.N. Security Council resolution.

As many as 500 African migrants are feared dead in the Mediterranean Sea. Reports say attackers crashed their boat into the migrants' boat off the coast of Malta last week.

Christiane Berthiaume is the spokeswoman for the International Organization for Migration. She said survivors reported that the attackers were involved in the human trafficking trade. She reported that the survivors said the traffickers ordered the migrants to change boats. The migrants refused, saying it was too dangerous. Ms. Berthiaume said a violent dispute broke out. She said the traffickers then crashed their boat in the boat that carried the migrants.

She described the incident as "the worst shipwreck in years." The migrants were trying to get to Europe.

The Philippines answers China's threat with offer to U.S. Navy

The Philippines and China are trapped in a territorial dispute in the South China Sea. In recent years, both countries have clashed in the waters near the island of Palawan, in the west Philippines.

?Now, the Philippines says it may permit the United States to base some of its navy forces on the island as part of the new defense agreement.

Philippine military spokesman Ramon Zagala said, "the very purpose of that base is to enhance our defense capabilities westward to the West Philippines Sea. Oyster Bay is one of those that we want to offer to the United States so we can develop it." 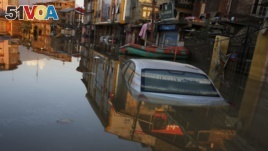 The flooding is considered the worst in more than one hundred years. Almost 300 people were killed. Between 250,000 and 300,000 people were rescued after the Jhelum River burst its banks more than a week ago.

More than 75,000 people remain in homes that are partly under water in Indian Kashmir's main city, Srinagar.

several – adj. three or more, but not many

refuse – v. to reject; to not accept, give or do something

rescue ­– v. to free from danger or evil