Update Required To play the media you will need to either update your browser to a recent version or update your Flash plugin.
By VOA
2011-6-16 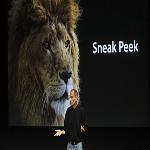 This is the VOA Special English Economic Report.

Apple's new version of its desktop operating system for Mac computers is called Mac OS X Lion. Apple says this latest OS X upgrade has over two hundred new features. But one big difference is how the company will sell it. The release is download-only.

Apple says Lion is coming to its App Store in July. The price is twenty-nine dollars and ninety-nine cents. Users without the current version, Snow Leopard, will have to pay an extra thirty dollars to download the new release.

Dave Wolf is Vice President for Strategy at Cynergy Systems in Washington. His company helps software designers to develop and market products. He says the computer that many people use most is their mobile phone.

People who download apps to smartphones have come to expect quick and easy software updates. Now, Dave Wolf says phones are shaping expectations for other computers.

Downloadable programs mean fewer trips to stores to buy software. But that can also mean fewer sales for stores that depend on physical products, including most video games. And not everyone has a high-speed Internet connection to make downloads quick and easy.

But Dave Wolf says the cost savings are a big help to small businesses trying to reach a wide market.

DAVE WOLF: "I think it's a boon to small software companies and entrepreneurs who have incredible ideas and want to get them out to market."

He says the Internet radio service Pandora, for example, can offer free music because it has no costs of selling discs in stores. This week Pandora began selling shares of stock to the public.

Next to go may be software stored on individual computers. Many companies are moving to cloud computing. The idea is to save money by storing software on somebody else's servers in large data centers.

This way people can easily access their music library or other applications from any device. This is not the case for users of Apple's iTunes. Now Apple thinks it has a solution with a cloud-computing service called iCloud.

And Microsoft has developed Windows Azure. This platform is for businesses and software developers to use Internet-based applications.

And that's the VOA Special English Economics Report. You can read and listen to our programs at 51voa.com. I'm Mario Ritter.