Arrest of Mladic Brings Serbia a Step Closer to EU

Update Required To play the media you will need to either update your browser to a recent version or update your Flash plugin.
By VOA
2011-5-27 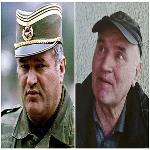 Photo: Reuters
Left, General Radko Mladic of the Bosinian Serb army in 1993, and, right, in Belgrade after his arrest this week.

This week, Serbia arrested one of Europe's most wanted men. Former Bosnian Serb general Ratko Mladic spent sixteen years in hiding. He is accused of genocide and other crimes during the war fought after Bosnia-Herzegovina declared its independence.

The International Criminal Tribunal for the former Yugoslavia announced charges against Mr. Mladic in nineteen ninety-five. He is charged with the killing of eight thousand Bosnian Muslim men and boys that year at Srebrenica, a town on the border of Serbia. Srebrenica was supposed to have been protected as a United Nations "safe area."

Mr. Mladic is also accused of ordering or carrying out war crimes during the three years in which Sarajevo was surrounded and attacked.

His son, Darko Mladic, says his father is not in good health. He also says his father believes he is not guilty of the charges. But on Friday, a court in Belgrade ruled that Ratko Mladic is healthy enough to be tried in the Netherlands. His lawyer said he would appeal the ruling.

Russia, an ally of Serbia, has called for a fair trial.

The capture of Mr. Mladic was a condition for Serbia to become a candidate to join the European Union. Another condition has been the capture of former Croatian Serb political leader Goran Hadzic, who has yet to be arrested.

The wartime political leader of the Bosnian Serbs, Radovan Karadzic, was captured in two thousand eight. He also faced charges in The Hague, but his trial was suspended. Former Serbian president Slobodan Milosevic also went before the tribunal, but he died during his trial.

Serbia has been under intense international pressure to arrest Ratko Mladic. President Boris Tadic announced that he was arrested Thursday morning. The former general was at a farmhouse in a village about one hundred kilometers from Belgrade.

The arrest happened during a visit by Catherine Ashton, the foreign policy chief for the European Union. But President Tadic dismissed the suggestion that the government could have acted sooner.

BORIS TADIC: "We are not making calculations when and how to deliver. We are doing that because we truly believe this is in accordance with our law."

The Serbian president said there will be an investigation into how Mr. Mladic avoided arrest for so long.

Kada Hotic from the Mothers of Srebrenica Association accused Serbia of knowingly hiding a man she calls a "monster." Still, she and other family members of victims welcomed the arrest, while some Bosnian Serbs expressed anger.

JAMES KER-LINDSAY: "Many Serbs, yes, do regard Ratko Mladic as some sort of hero."

James Ker-Lindsay is an expert on southeast Europe at the London School of Economics.

JAMES KER-LINDSAY: "They look to the events that took place in Bosnia and rather than seeing him as a military leader of an act of aggression rather view him as being the defender of the Bosnian Serb people. So in that sense, there is a certain degree of latent support for him."

But Mr. Ker-Lindsay says Serbs are conflicted because they understand that their country's future has to be a part of Europe.

JAMES KER-LINDSAY: "It's not about forgetting what took place in Bosnia or, indeed, the entire Western Balkans in the nineteen nineties. But it's about recognizing that Serbia's got to atone for this, pay its price and move on. And people understand that Mladic is absolutely central to that process."