Update Required To play the media you will need to either update your browser to a recent version or update your Flash plugin.
By Mario Ritter
2010-5-6 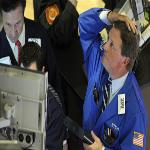 Greece's debt crisis has shaken investors in the United States and worldwide. They worry that it could spread far beyond Greece.

On Thursday, a day after huge protests in Athens, the Greek parliament approved a series of spending cuts.

Greece has to cut thirty billion dollars as part of a bailout deal with the European Union and the International Monetary Fund. The deal is for one hundred forty-five billion dollars in loans.

The cuts include wage freezes and reductions in retirement pay for government workers. A new requirement raises the retirement age for women from sixty to sixty-five.

Critics say the austerity plan will hurt the poor especially. But Greek labor costs are high even for Europe. And Greece's public debt is equal to at least one hundred fifteen percent of its economy. The cuts may be the only hope to avoid declaring bankruptcy.

Sebastien Galy is senior currency strategist for the French bank BNP Paribas. He says other European countries delayed rescuing Greece because it was politically unpopular. Now they are paying for it.

SEBASTIEN GALY: "They certainly lost an opportunity that we had in January where it would have cost roughly sixty billion euros to save Greece."

The quality of Greek government debt is now rated at "junk" levels. The high risk has investors demanding higher interest rates, and not only on Greek debt.

Portugal and Spain have also had their credit ratings reduced. Both borrowed from credit markets in the last few days. And both had to pay far higher rates than Germany, the safest investment in the euro area.

The euro is eleven years old and used as the currency of sixteen countries. But less trust in the euro has reduced its value to the lowest levels in over a year.

Sebastien Galy says growth expectations for the euro area have dropped. This has affected producers of raw materials such as Australia, Brazil and Canada.

But he says the falling euro should help ease the crisis. He expects the exchange rate against the dollar to reach one-to-one within a year. That would be good news for European countries with heavy debt loads.

SEBASTIEN GALY: "The lower the euro is, the more competitive these economies become and, therefore, the more the fiscal concerns are going to be reduced."

While the euro has fallen, the dollar has gained value. Investors fleeing risk have bought dollars and American debt.