How Much Should a Teacher's Job Depend on Test Scores?

Update Required To play the media you will need to either update your browser to a recent version or update your Flash plugin.
By VOA
2011-8-10

Students in Washington, DC, will return to classrooms this month to begin a new school year. But at least five percent of their teachers will not return with them. Last month, the District of Columbia public schools told two hundred six teachers that they are not good enough to stay.

The school system dismissed seventy-five teachers last year. It was the first year of a new teacher rating system.

Experts say such large numbers of dismissals are rare in American schools. But in Washington the rating system is not governed by the labor contract with the teachers union. So school officials have more freedom. 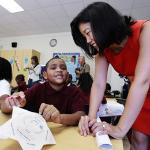 The system is called IMPACT. Teachers are observed in the classroom five times a year for at least thirty minutes each time. They are also judged by student test scores.

Administrators rated sixty-five of the two hundred six teachers as "ineffective." The others lost their jobs because they were rated "minimally effective" for a second year.

The National Council on Teacher Quality is a research group that works to increase the number of effective teachers. Emily Cohen, a policy director there, says the council supports the IMPACT system.

Some Washington teachers say their ratings depend too heavily on test scores. For some teachers, half of their rating is based on how well their students do. But Emily Cohen says test scores are important.

EMILY COHEN: "Testing is probably one of the -- it's the most objective data that we have on teacher performance. The District also is looking at other things, using master educators to evaluate teachers. So it's not just looking at student test performance, it is using other sources of data."

Teachers with the highest rating -- "highly effective" -- can receive a performance bonus of up to twenty-five thousand dollars. In addition, they can receive a pay increase.

Almost sixty percent of the teachers who were rated "minimally effective" last year stayed in the school system and improved. School officials say these teachers received help to become better.

Michelle Rhee created the IMPACT system. She gained national attention for her aggressive reform efforts when she led the troubled school system in the nation's capital. She left last year and her deputy, Kaya Henderson, took her place.