Update Required To play the media you will need to either update your browser to a recent version or update your Flash plugin.
By VOA
2011-12-9

Photo: AP
EU heads of state stand for a group photo at an EU summit in Brussels on Friday. But deep divisions on the future of Europe remain.

Most members of the European Union have agreed to a deal to increase central control over the budgets of individual governments. The plan to increase economic ties was announced Friday at a meeting of European leaders in the Belgian capital, Brussels.

All seventeen countries that share the euro currency agreed to the deal. All together, twenty-three of the twenty-seven European Union nations agreed to it. EU president Herman van Rumpoy said three more members are considering it. That would leave Britain as the only country against the plan.

HERMAN VON RUMPOY: "Our preference went to a full-fledged treaty change with the twenty-seven, changing the treaties of the European Union. We tried it, but because there was not a unanimous decision, we have to take another decision."

The plan is an effort to solve the debt problems that have threatened the euro and driven Europe into an economic crisis. 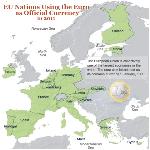 Britain is the strongest of the ten non-euro countries. Prime Minister David Cameron defended his decision to reject the deal.

Stock prices and the value of the euro rose Friday after the agreement. But economists were divided in their opinions about whether the plan would do enough to end the current problems and prevent future ones.

Greece, Portugal and Ireland have received international financial help over their high levels of government debt. Some experts worry that Spain and Italy could have even greater needs. Some economists think the euro area has already entered a recession.

Germany and France are the two strongest economies in the euro area and led the calls for more central budget supervision. German Chancellor Angela Merkel said more unity will make the euro more secure by punishing countries that do not control their budget deficits.

EU members that follow the new treaty must keep their deficits below one-half of one percent of their economic output.

European leaders said they expect to sign the treaty by March. But an agreement among politicians is one thing. Passing a new treaty into law is another. Some countries will decide that parliamentary approval is enough. Others, however, may put the treaty to a popular vote.

The leaders also agreed on other measures. These include giving the International Monetary Fund more money to try to stop the eurozone crisis from spreading.

CHRISTINE LAGARDE: "Number one, they want to really consolidate their fiscal union. Number two, they've decided to accelerate the European stability mechanism. And number three, they've decided to add to the resources of the International Monetary Fund by an amount of two hundred seventy billion dollars, that is to be confirmed within ten days. So, that's, that's a really good step in the right direction."

But Simon Tilford, chief economist at the Center for European Reform, in London, says the new treaty does nothing to solve Europe's debt crisis.

SIMON TILFORD: "The problem is that fiscal austerity will not solve this crisis -- at least not alone. Fiscal austerity has in many ways become part of the crisis. Enforcing unending austerity on countries in the periphery has already made their predicaments much worse and threatens to make a bad situation in Spain and Italy even worse than it currently is."

Mr. Tilford says whether Britain will be weaker for staying out of the deal depends on what happens to the euro area.

SIMON TILFORD: "If the eurozone does master this crisis and holds together, and we see increased integration between the participating countries within the eurozone, then Britain will become progressively marginalized within the EU."

And if the eurozone breaks apart? Then that, he says, is another story.