Update Required To play the media you will need to either update your browser to a recent version or update your Flash plugin.
By George Grow
2012-3-13 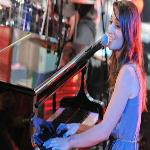 Music is often called the universal language, meaning everyone can understand it. This week, we hear music from Chuck Brown. The Washington, DC, musician is recognized as the inventor of go-go. Go-go music mixes jazz, rhythm and blues and even hip-hop.

We also learn about one of the fastest growing music media. But it might not be what you think. Vinyl records are making a comeback. Young people and old are listening to music on the big, black plastic disks. Some of the music that found fame on vinyl is also making a comeback.

But first we hear singer/songwriter Sara Bareilles tell us about her music. Critics praise her work as personal and thoughtful pop music --- with an edge.

CHRISTOPHER CRUISE: Music has always been important for Sara Bareilles. She began performing in school at an early age. Later, she joined a singing group while studying at the University of California, Los Angeles.

SARA BAREILLES: "I got started my sophomore year at school, and I was just talking about it earlier. Actually, I felt like I just found my home because we were all equally geeky."

SARA BAREILLES: "They felt very, like, they went hand in hand to me ... writing the songs and singing them. Because I think they are all so personal and I tend to be a very autobiographical writer."

SARA BAREILLES: "I do write very much from my own perspective. I'm writing about things I've gone through ... and, you know, a lot of relationship stuff and just sort of how I see the world."

CHRISTOPHER CRUISE: She talks about her album "Kaleidoscope Heart."

SARA BAREILLES: "I feel like I took more risks this time around both from the songwriting perspective and from a production point, as well. We just kind of swung for the fences. And I wanted to have ... I didn't want to limit myself or self-edit too much this time around, so I really did what felt good. I had a blast recording the record."

CHRISTOPHER CRUISE: Sara Bareilles is best known for her 2007 hit "Love Song." You may be surprised to learn why she wrote it.

SARA BAREILLES: "It was actually written for my record label. I had been turning in new music. I was getting the red light. I couldn't go into the studio yet because they were waiting for something. But I wouldn't ... nobody said what they were waiting for. So I kept turning in new songs, thinking like, ‘Is this what you want? Is this what you want?' And it was always a big thumbs down, and I ended up writing ‘Love Song' out of frustration."

MARIO RITTER: In music, being called the "Godfather" of something is high praise. Chuck Brown is known as the Godfather of go-go. It is a cross-over music form with several influences.

FAITH LAPIDUS: Chuck Brown has been called the creator of go-go -- a form of African-American music that developed in Washington. Go-go is part jazz, part rhythm and blues, and part hip-hop. It became popular in the 1970s.

CHUCK BROWN: "Back in the day when we was doing Top 40, you see, we used to stop sometimes after we'd do a song, but I got an idea of not stopping, you know. Just keep going, coming out of one song and going to another."

CHRIS MURRAY: "This exhibition, ‘Bustin Loose,' is a tribute to Washington, DC, and the area's rhythm and blues tradition and soul. And Washington has an extraordinary legacy, a musical legacy that we're honoring here today with Fernando Sandoval's photographs."

MEMPHIS GOLD: "I feel like I'm in heaven. I do. I feel that I'm telling a story with the songs that I sing. I'm sending something to, for our young kids and younger people to take with them when I'm gone."

Fernando Sandoval took all the pictures when he was developing personal relationships with the musicians.

FERNANDO SANDOVAL: "I guess unconsciously I was collecting this work to bring it finally to a gallery like this so they could get the recognition they deserve and are looking for."

SELENA McDAY: "And I'm so glad Fernando did this because I've worked with almost all of these people. Bobby Parker and I have shared the stage with Chuck Brown."

MUSIC FAN: "I loved seeing Chuck Brown here when I walked in because he's a Washington staple."

MUSIC FAN: "A lot of these people, you never see the face. You always listen to the music. So it's great to put the face with the music."

FAITH LAPIDUS: Chris Murray is excited to present these artists to people around the world.

CHRIS MURRAY: "The world loves blues music. The world loves soul music. One of America's greatest exports is its music. And it's a common language we all have – music."

For the latest music videos and interviews with performers, visit Border Crossings at voamusicmix.net. You'll also find listening information and audio of our radio broadcasts. Call or Email us during the show and tell us what you want to hear!

I will read your dedication on the air and play your song.

MARIO RITTER: Music echoes in our memories for a long time. Generations of Americans remember vinyl records were once the way to listen to their favorite songs over and over again. Now, vinyl is back.
For many Americans, vinyl records bring back memories of growing up in the '60s and '70s.

At that time, people listened to Elvis Presley and The Beatles on black discs spinning on a turntable. Today's younger generation did not grow up with vinyl records. But for them, vinyl is cool.

MARIO RITTER: Jonathon Oldmixon is in his 30s. For him, records are collectibles.

JONATHON OLDMIXON: "I don't have a preference. However I'll admit there are some things that I want specifically on vinyl because they have a certain aesthetic appeal to them. The picture on the cover is really nice or the record itself is really nice."

MARIO RITTER: Nielsen SoundScan reports on music and audio sales in the United States. It says vinyl records were the fastest growing music media in 2010. About three million were sold. Still, sales of vinyl records in America are small compared to CDs and MP3s.

Bill Daly is the owner of Crooked Beat.

BILL DALY: "Since 2007, vinyl has grown to where it is now -- 99 percent of our sales. In 2007, when they started introducing new vinyl releases, free MP3 download card with it, that's when the sales started surging."

MARIO RITTER: He says his online sales of vinyl are growing.

BILL DALY: "We ship all over the world almost every day. You name the country, we've probably shipped there because there's not very many record stores around the world anymore."

ERIC ASTOR: "They haven't made a new vinyl pressing machine since the early '80s, so you have to find the equipment that's available and there's not a lot of equipment available."

MARIO RITTER: Eric Astor has partnered with vinyl factories in Germany and Holland. The records are sent to Furnace's headquarters, prepared and shipped. Astor says his company produces more than two million vinyl records a year.
For some people, they are a reminder of a time before digital media.

Joe Pollock has been collecting vinyl for seven years.

JOE POLLOCK: "I go through my collection, I pick out what I want to hear, I put it on, there's that, you're touching it, you're feeling it. There is a warmth to it. And you have to sit through a whole album."

ERIC ASTOR: "A record that's pressed well from start to finish can sound much better than anything digital because of the fact that it's not in compressed, whereas with any sort of a CD or even a high-res digital file there's always a little bit of compression."

This program was co-written by George Grow. Our announcers were Christopher Cruise and Faith Lapidus. June Soh, Julie Taboh and Larry London all provided stories. I'm Mario Ritter. You can watch video versions of each of each part of this program on our website, 51voa.com.