Update Required To play the media you will need to either update your browser to a recent version or update your Flash plugin.
By Anna Matteo
14 June 2020

In Sweden, scientists are looking to a farm animal to help them find a treatment or vaccine against the new coronavirus.

Researchers from the Karolinska Institute, a medical university near Stockholm, are putting their hope in a 12-year-old alpaca from Germany. Alpacas belong to the camel family. 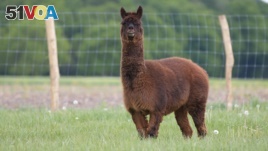 Tyson the Alpaca is pictured on the farm in Germany, where he was immunized with coronavirus proteins leading to an antibody discovery that may aid human treatments for COVID-19, May 19 2020. (Karolinska Institute/Preclinics gmB/Handout via REUTERS)

The scientists started by recreating the so-called "spike" protein that permits the coronavirus to infect human cells. They then injected the spike protein into the alpaca, whose name is Tyson.

The team is collecting blood samples to see whether the alpaca can develop antibodies against the spike protein. Extremely small antibodies, known as nanobodies, stick to the same part of the virus as human antibodies.

In a statement to the press, the researchers called them "neutralizing antibodies." If you neutralize something harmful, you take away its ability to cause harm.

The head of the research team in Sweden is Gerald McInerney. He said the hope is that the neutralizing antibodies will be able to effectively block the virus protein -- and thereby the coronavirus -- from entering cells and spreading.

The results could be used to develop drug treatments or possibly a vaccine for COVID-19, the disease caused by the coronavirus. While the scientific work is still at an early stage, McInerney said his team has seen evidence it could work in people.

In a Reuters interview McInerney said, "In principle, all the evidence would suggest it will work very well in humans." He added however, that "it is a very complex system."

McInerney noted that the coronavirus mutates "quite easily." So, researchers need to be prepared to develop several different kinds of antibodies.

McInerney explained that his team began its research back in January. At that time, they say they believed the coronavirus could become a serious pandemic. The researchers also knew it would take a long time to develop a vaccine, as well as drugs to slow the progression of the disease and save lives, he added.

But why use an alpaca?

When will we have a vaccine?

Scientific experts say it will likely take some time to develop a vaccine for COVID-19.

The team in Sweden is moving on to the next step, which could involve testing with other animals, such as mice or hamsters. The scientists say they hope their results can be used as a model for future COVID-19 research.

As for Tyson the alpaca, the researchers say his job is done.

"Tyson is 12 years old, I believe, and he may be looking at retirement soon," McInerney told Reuters. "So, he'll live out his life on his farm back in Germany."

For Reuters: reporting by Philip O'Connor; writing by Simon Johnson; editing by Peter Graff. Anna Matteo adapted it for VOA Learning English with additional information from the Karolinska Institute's website. Bryan Lynn was the editor.

antibody – medical n. a substance produced by the body to fight disease

principle – n. a basic truth or theory : an idea that forms the basis of something : a law or fact of nature that explains how something works or why something happens

pandemic – n. occurring over a wide geographic area and affecting an exceptionally high proportion of the population