Update Required To play the media you will need to either update your browser to a recent version or update your Flash plugin.
By Kelly Jean Kelly
10 March, 2018


American universities across the country are publicly supporting high school students who participate in peaceful protests against gun violence.

University admissions officials have posted on official websites and the social media service Twitter. The announcements are aimed at students who are applying for colleges and universities. They say students who are suspended for protesting gun violence will not be punished in the application process.

The statements come in response to a national discussion about how to fix the problem of gun violence in American schools.

Supporting the right to protest

On February 14, Nikolas Cruz shot and killed 17 people at his former high school in Parkland, Florida. Since then, high school-age activists have created a national movement calling on politicians to find a solution to gun violence.

The students have organized many peaceful protests, including a call for a national school walkout on March 14. A march in Washington D.C, called March for Our Lives, is also planned for later in the month. People participating in the events are demanding that U.S. lawmakers in Congress make changes to the country's gun policies. 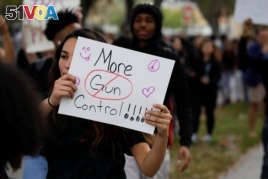 Students from South Plantation High School carrying placards and shouting slogans walk on the street during a protest in support of the gun control, following a mass shooting at Marjory Stoneman Douglas High School

However, officials at some high schools have threatened to punish students if they protest during school hours.

For example, an official at the Needville Independent School District in Texas spoke about the issue last week. Curtis Rhodes sent a letter to families and wrote on the school's website. Rhodes said students who take part in protests during school hours will be suspended. That is, the students will not be permitted to return to school for several days, and they will not receive credit for any tests or work they missed during that time.

Rhodes was firm about the rule. He said the district would suspend high school students who protested during school hours "no matter if it is one, fifty, or five hundred students involved." He added that parents who approved the students' absences from school would not change the rule.

A suspension is a serious punishment in American high schools. It can hurt a student's chances of being accepted into a college or university.

A high school counselor in the state of Washington, David Quinn, was concerned about how the suspensions would affect applicants. So he spoke admissions representatives from three schools: DePaul University in Chicago, Trinity University in Washington, and Smith College in Massachusetts.

The educators wanted to create a social media movement supporting students' right to protest. They posted their support on Twitter.

The movement quickly grew. Now, more than 200 American universities have made public statements promising not to punish students in the college application process for any peaceful protest-related suspensions.

Hanna Hendlowitz is the senior assistant director of admissions for Yale University. She posted on the school website: "We value student voices on campus and we encourage discourse and action. To punish our applicants for doing just that would go against the very beliefs that make Yale such a special place to study."

Stu Schmill is the dean of admissions for the Massachusetts Institute of Technology, or MIT. He posted on the school's website: "We have long held that students should not make decisions based on what they think will get them into college, but instead based on values and interests that are important to them... We believe that civic responsibility is something that is learned best by doing."

Angel B. Perez is the vice president of enrollment and student success at Trinity University in Washington, DC. He told VOA he wasn't trying to make a political statement or to "choose a side" in the gun debate. Instead, he was supporting students participating in protests as a way to learn and express their ideas.

"It was a representation of our values, what it is that we care about. We want students who stand up for what they believe in, who take controversial views and perspectives... that's something we would admire in the college admissions process."

Perez also said peaceful protests are important to American society. Right now, Perez said, people are not "constructively disagreeing with each other." He says speaking out on social media and holding debates can move society forward on difficult issues.

Other universities that have publicly supported high school students engaging in peaceful protests include Harvard, University of Virginia, Cornell, and Stanford.

Do you think high school students should or should not be able to participate in protests during school hours for issues they believe in? We want to hear from you. Write to us in the Comments Section or on 51VOA.COM.

admire - v. to feel respect or approval for

application - n. a formal and usually written request for something (such as a job, admission to a school, a loan, etc.)

constructive - adj. helping to develop or improve something

discourse - n. the use of words to exchange thoughts and ideas

disrupt - v. to cause (something) to be unable to continue in the normal way

engage - v. to get and keep (someone's attention, interest, etc.)

perspective - n. a way of thinking about and understanding something (such as a particular issue or life in general)

mobilize - v. to bring (people) together for action