Americans Debate Over Payments to Terrorrists

Update Required To play the media you will need to either update your browser to a recent version or update your Flash plugin.
By Jill Robbins
07 September, 2014


The militant group known as the Islamic State has claimed responsibility for killing American journalists James Foley and Steven Sotloff. Americans are now debating whether the United States should have paid money to the group in exchange for their release.

Reports say that Islamic State militants asked for millions of dollars before the execution of newsman James Foley. The U.S. government bars ransom payments to kidnappers. However, the head of the online news agency where James Foley worked says that the reporter's parents were hoping to raise money to pay for his release. Philip Balboni is president of the GlobalPost news agency. He says the U.S. government knew what Mr. Foley's parents were doing but did not stop them.

Mr. Balboni said that the militants did not say exactly how much money they wanted. He said the parents began to raise money because they hoped the kidnappers would let them pay for their son's release. 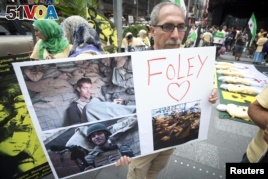 A man holds up a sign in memory of U.S. journalist James Foley during a protest against the Assad regime in Syria in Times Square in New York August 22, 2014.

Deborah Pearlstein is a professor at the Yeshiva University Cardozo School of Law in New York City. She says that there is no law that stops the U.S. government from paying money to or negotiating with terrorist groups. She says Congress could pass a law to keep the president from doing that but it has not. She believes that the government is talking about U.S. policy, not law, when officials say they do not negotiate with terrorists.

But another law professor, John O. McGinnis, says that it would be against the law to give money to some groups. He teaches at the Northwestern University School of Law in Illinois. Under U.S. law, people cannot give money or provide other support to terrorist groups.

Daniel Benjamin is director of the John Sloan Dickey International Exchange Center at Dartmouth College. He says that in the case of ransom payments to kidnappers, the laws have never been enforced by the U.S. government.

enforce – v. to make something happen

militant - n. someone active in trying to cause political change, often by the use of force or violence

policy – n. an established set of plans or goals used to develop and make decisions in politics, economics or business

release – v. to free; to permit to go. n. a freeing or releasing.