Update Required To play the media you will need to either update your browser to a recent version or update your Flash plugin.
By VOA
08 July, 2016


In this week's national parks journey, we explore a unique landscape in the north central United States.

The land is big and mostly flat. There are endless fields of corn, wheat and soybeans. Colors of green and gold paint the earth for kilometers. 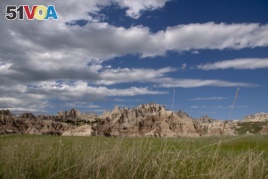 But as we travel west, the farmland gives way to wild grasses. It grows tall here under a huge blue sky. Farther on, however, the grass becomes much shorter. A strong dry wind blows continuously from the west.

Suddenly, the land is torn and rocky, dry and dusty. The green is gone. Now we are surrounded by light reds and browns. Purple and gold hues can be seen as well. All around are broken, disorganized forms. There are sharp walls of rocks, and hills and valleys of all sizes and shapes.

Welcome to Badlands National Park in the state of South Dakota. 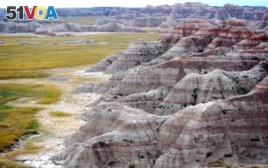 Hundreds of thousands of years ago, this whole area was grassland. Then forces of nature destroyed the grass in some parts. Water and ice cut into the surface of the Earth, splitting open some of its oldest rocks. Nature beat at the rocks, wearing them away.

The result is one of the strangest sights, a place of otherworldly beauty.

All together, the Badlands cover more than 15,000 square kilometers. About 10 percent is part of the national park. The area is a study in extremes. Temperatures in the summer have been as high as 46 degrees Celsius. In the winter they have dropped to as low as 41 degrees below zero.

Life in the Badlands is difficult. Its name comes from the Lakota Native Americans. They called the area "mako sica" or "land bad" because of the extreme temperatures and harsh landscape.

The term "badlands" has come to be used for areas where soft rock is eroded in a very dry climate.

Looking at a rock wall in the Badlands is like looking back through time. The layers and colors in the Badlands' strange formations were formed over millions of years.

The long history of the Badlands began some 65 million years ago, around the time the dinosaurs died out. A huge sea covered the middle of North America. It was drying up. The land at the bottom of the sea was black shale rock.

That shale is now at the bottom of the Badlands. The next level of rock is from what geologists call the Oligocene Epoch. That period began about 37 million years ago. At that time, the Badlands area was warm and wet. A jungle grew there. A large number of warm-blooded animals lived in the jungle.

Some of these animals were buried in the mud left behind by floods. Over millions of years, their bodies turned to rock. These fossil remains are a record in stone of what ancient animals looked like. The Badlands holds the world's richest collection of fossils from the Oligocene Epoch. The area contains fossils from rhinos, horses, and huge cats. 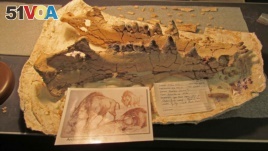 Because of this evidence here, we know that the period was great for mammals. Their total population worldwide increased greatly. And they grew in body size to take over the land left by the dinosaurs.

About 28 million years ago, the environment of North America became much drier and cooler. The jungle disappeared. The land in the center of the continent became a prairie. A prairie is a large open area of grassland. The prairie here is one of the world's largest.

The Badlands were created on the western edge of this great prairie. They started to take shape as rain, wind, snow and ice beat down on the land. The rain and ice tore deep cuts in the soft earth. Over time, they became wider and deeper. The wind dried the earth and blew away the top soil.

Today, rain comes to the Badlands mostly in sudden, fierce storms. Often, the area's rivers are cooked dry by the hot sun and wind. Yet when it rains, the rivers flood. Their waters cut ever deeper into the soft earth. 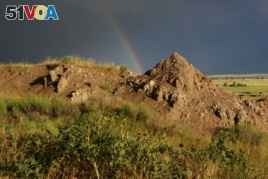 A rainbow forms after a storm at Badlands National Park

The Badlands are very dry, but they are not a desert. They are filled with many living things. There are short native grasses and wildflowers. The national park is home to many animals. Bison, bighorn sheep and prairie dogs live here. Prairie dogs are small animals that dig tunnels in the earth and live underground.

Every living thing in the Badlands must be able to survive the extreme conditions.

That includes the humans who have called the area home. Several hundred years ago, the Sioux tribe of Native Americans lived all around the Badlands. At the time, the Badlands were rich with animals. There were wolves and bears, bighorn sheep and deer. The most important animal to the Sioux, however, was the bison.

They look like huge, hairy wild cattle. The Sioux way of life was completely organized around hunting bison. They used every part of the animal. They ate the meat. They made clothing and tents from its fur and skins. They used the bones as tools. They even boiled the feet to make a sticky substance to hold things together. 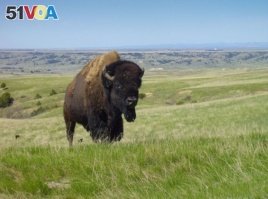 White settlers who came West also hunted bison. In fact, they hunted bison until very few remained. They also planted crops where the bison had once fed. In time, the Sioux way of life on the Great Plains came to an end.

The settlers and the federal government did not respect Native American cultures. The government expected the Sioux Indians to learn to farm. But the Badlands harsh environment was not good farmland. With few bison left to hunt, the Indians were sent to live on a reservation next to the Badlands area.

The Badlands became a national monument in 1939. Congress declared it a national park in 1978. More than 1 million people visit Badlands National Park each year.

The park is now a protected area for bison. The National Park Service moved bison back into the Badlands. The animals are doing well. So are the bighorn sheep, foxes, coyotes, golden eagles, and prairie dogs.

Most of the wild animals must be watched from a distance, especially the bison. The Park Service says a full-grown bison can weigh as much as a small car. It can run faster than a horse, And it can become angry and dangerous easily. 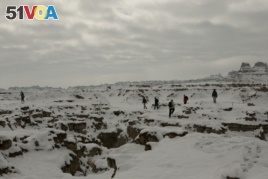 Today, of course, the history of the Badlands continues to be written. As measured in geological time, the Badlands are being destroyed rapidly. The area, with its unusually soft rock, is being worn away at a rate of one centimeter per year. In a few more million years, the Badlands will be worn away, forever.

otherworldly - adj. seeming to belong to or come from another world

geologist - n. a scientist who studies rocks, layers of soil, etc., in order to learn about the history of the Earth and its life

soil - n. the top layer of earth in which plants grow

reservation - n. an area of land in the U.S. that is kept separate as a place for Native Americans to live