Update Required To play the media you will need to either update your browser to a recent version or update your Flash plugin.
By Kelly Jean Kelly
26 March, 2017 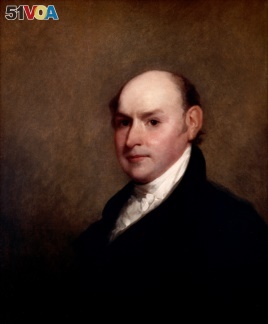 But Quincy Adams went on to have many successful years working in a different job. He is the only former president (so far) to serve in the House of Representatives.

The parents of John Quincy Adams, John and Abigail, were strong patriots. Theirs was one of the founding families of America.

Abigail Adams especially raised her son to serve his country. She expected him to become president. She told him that, with his good education and training, if he did not serve in a high public office it would be his own fault.

Quincy Adams did not disappoint his mother. As a child, he learned to speak at least four languages and read Greek and Latin. He also studied Shakespeare’s plays.

At age 10, he traveled with his father to Europe. As a young man, he worked alongside John Adams in American diplomatic offices in Paris, Amsterdam and St. Petersburg.

Finally, Quincy Adams returned to his home in Boston in time to graduate from Harvard. He was working as a lawyer by the age of 23.

Stories confirm that Quincy Adams was a brilliant boy and young man. But he rarely compromised his ideas. His inability to work with other lawmakers and to consider public opinion were partly to blame for his difficult presidency.

Quincy Adams may have been a poor politician, but he was an excellent diplomat. In the early part of his career, he served as the American ambassador to the Netherlands, Germany, Russia and Britain.

He helped lead the negotiations that ended the War of 1812.

And he served for eight years as secretary of state under James Monroe.

Some of that president’s accomplishments owe a lot to Quincy Adams. He helped negotiate the purchase of Florida from Spain.

And, he was of the people responsible for the Monroe Doctrine. It warned Europe not to interfere in the Western Hemisphere.

But Quincy Adams could be impatient, especially with lawmakers. Many of them, he believed, did not care much about the country and wanted to help only themselves.

Quincy Adams also avoided political battles. As secretary of state, he appointed people whom he thought were capable, even if they did not support his political party.

Similarly, when he became president, he tried to bring political opponents -- along with representatives of different parts of the country -- together in his cabinet.

His opponents, however, refused to serve.

And, although his cabinet included southerners, he did not really have the support of the South.

Yet Quincy Adams talked about unity in his presidential inaugural speech. Adams said the Constitution and the representative democracy of the United States had proved a success. The nation was free and strong and stretched across the continent, from the Atlantic Ocean to the Pacific.

He noted that political divisions had eased. So now, he said, it was time for the people to settle their differences and make a truly national government.

In his first message to Congress, President Adams described his ideas.

The chief purpose of the government, he said, was to improve the lives of the people it governed. To do this, he offered a national program of building roads and canals. He also proposed a national university and a national scientific center.

Adams said Congress should not be limited to making laws only to improve the nation's economic life. He said it should make laws to improve the arts and sciences, too.

But many people of the West and South did not believe that the Constitution gave the federal government the power to do all these things. They believed these powers belonged to the states.

Their representatives in Congress rejected the president’s proposals.

In addition, a new opposition party was trying to weaken support for Quincy Adams. They supported a general from Tennessee named Andrew Jackson.

Historian Harlow Giles Unger says John Quincy Adams was never able to meet the high expectations many people had for him.

“His presidency was a complete failure,” Unger told VOA. “He was able to accomplish nothing.”

Quincy Adams lost the presidential election of 1828 in a landslide.

He refused to attend the inauguration of Andrew Jackson. He returned to his home in Quincy, Massachusetts depressed and worried about the country.

His wife, Louisa Catherine Johnson Adams, believed they were returning to Massachusetts to stay. She was an American, but was born in England. Her mother was British. She was, at the time, the first foreign-born first lady.

John and Louisa had four children, but their only daughter had died as a baby. Their sons were grown by the time Quincy Adams retired from the presidency.

Some neighbors asked if Quincy Adams would consider representing the district as a member of the U.S. Congress. He agreed – but only if voters would let him act as he believed was right, instead of as what would be politically popular.

Apparently they agreed, too, because voters elected Quincy Adams to the House of Representatives nine times.

In Congress, Quincy Adams often fought for citizen’s individual liberty. He strongly opposed slavery. His ideas were not widely popular at the time, especially among other lawmakers. They had created a rule that said Congress would not even consider any measures against slavery.

Yet Quincy Adams defended the rights of enslaved people -- frequently, and sometimes successfully.

He died at the age of 88, a few days after suffering a stroke on the floor of the House of Representatives.

At the time, lawmakers were considering a proposal. And, as usual, John Quincy Adams was loudly voting no.

patriot - n. a person who loves and strongly supports or fights for his or her country

fault - n. responsibility for a problem, mistake or bad situation

disappoint - v. to make someone unhappy by not being as good as expected or by not doing something that was hoped for or expected

accomplishment - n. the successful completion of something