Talking Movies on Words to the Wise

Update Required To play the media you will need to either update your browser to a recent version or update your Flash plugin.
By VOA
24 March, 2017


Many of you might watch American movies to help you learn english. I'm Caty Weaver. My colleague Ashley Thompson is here in the studio with me.

Today on Words to the Wise the two of us are going to talk about movies.

Well, not movies directly. We are actually going to talk about how Americans talk about movies.

We'll go over some common words and phrases that you might not have heard before -- or maybe some you have heard and wondered about.

So, Caty, do you go the movies?

Ooh, flicks -- that's a good word. Can you explain what it means?

Flick is another word for movie. It comes from the word flicker. Back in the early days of movies the equipment in theaters that they used to show the movies was not very advanced. So, the film would go from bright to dark very, very quickly. The light in the film would flicker. So, people called movies "flickers" and then, "flicks."

So, it evolved from flicker to flick.

Yes, we do. Now, when you go to the movie theaters today, you don't see the flicker effect anymore because the machines are much improved, or more advanced. But the name flick for movie has stuck.

Right, so the first definition of cinema is movie theater. But it might also mean the art or industry of moviemaking. People might talk about 'American cinema' or '20th century cinema,' for example. 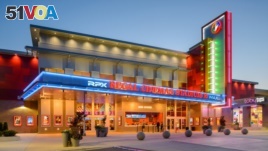 A cinema can mean a movie theater, or the moviemaking industry.

Another fun term for Hollywood that you might hear is tinseltown. Tinsel is long narrow strips of shiny metal that we use for decoration. People might put tinsel on Christmas trees. And, actually, it can also be used in clothing, as well.

So, does that mean Hollywood is a bright shiny place?

I guess, in a way. It is in full of bright and shiny stars -- movie stars. But the name also suggests a falseness. Tinsel is not really a high quality metal, of course. It shines like it's silver or gold but it's definitely not. It's seen kind of as false or fake, and some people might say that about Hollywood in general.

So, another term you might hear in movie talk is "blockbuster." It sounds a little dangerous but every filmmaker wants one, right?

Yes, definitely. So, if someone calls a movie a blockbuster hit that means it's made a lot of money and its very popular -- many people bought tickets to go see it theaters.

This year, in fact, "LaLa Land," that musical, was a huge hit. It was a blockbuster.

Definitely, the blockbuster of the year.

Right. Another term referring to how a movie does is "sleeper." When a movie is big hit but it wasn't expected to be; or if there wasn't a lot of buzz -- or talk -- about it before it came out but it does really well, it's called a sleeper.

Yeah. You might hear this about films that had a lower budget or were not directed by some of the most famous names in Hollywood. They might be independent movies; a lot of them become sleeper hits.

So, sometimes a movie might get a lot of buzz but then it's a flop.

Which means it does poorly at the box office and also sometimes with critics, too. A movie that's a big flop is kind of a disaster for its makers.

So to flop as a verb means to fall or hang, kind of in a heavy, loose way. So when a movie flops, it's a very hard fall -- really another way of saying failure.

So, we hope this Words to the Wise has not been a flop. We'd love to know what you thought of the show and, also we'd like suggestion for future shows -- what kind of words or phrases you'd like to hear about.

colleague - n. a person who works with you: a fellow worker

buzz - n. the things that are being said about something

hit - n. something that is very successful