Update Required To play the media you will need to either update your browser to a recent version or update your Flash plugin.
By Anna Matteo
25 March, 2017

Today, we are down on the farm!

Since the 16th century, the word "farm" has meant "land used for agricultural purposes." But a much older meaning is related to economics. The English word farm comes from the Latin word firma, which means an unchanging payment.

Experts say the earliest meaning of "farm" was a yearly payment made on a loan or as a tax. Centuries ago, English farmers did not own their land. They made payments to the owner for the right to grow crops.

Okay, so the word "farm" has roots in economics. Therefore, it's no surprise to hear about someone buying a farm -- a farm. That is very different from someone who has bought the farm. When someone tells you that someone bought the farm, do not offer your congratulations. "Bought the farm" is a light-hearted way to say that a person has died.

Now, "buying the farm" is very different from betting the farm. When you bet the farm, you are willing to risk everything because you are confident in something. Used in conversation, it may sound like this: "Jack was out really late last night. I'm willing to bet the farm that today he will be late for work."

So, you can buy, own or bet a farm. You can also just farm, as in the verb. But today, the verb "farm" has come to mean something more than raising crops. To farm something out means to give work or duties to someone else to finish. 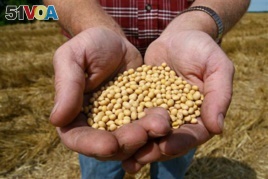 A farmer holds seeds at his family farm in Minnesota (File)

This "farming" action is quite different from planting and raising crops. To do that, farmers plant seeds. You could say that seeds start the growth process. In business, seed money is the financing you need to launch a project or company.

Now, sometimes we call the act of raising crops "sowing crops." To sow means to plant seeds in the ground. The verb "sow" also means to set in motion or to cause something to exist -- especially things such as fear, doubt or suspicion.

We use the word "sow" in two common idioms.

Let's say you have a friend who shows a lack of common sense and does stupid, crazy things. You might defend their behavior by saying: "Oh, he doesn't mean any harm. He's just sowing his wild oats." When someone "sows their wild oats" they act foolishly and make bad decisions when they are young.

If that "seed" -- whether of doubt, caution or some other idea -- takes root, it begins to develop into something bigger. If it dies on the vine, it doesn't grow into anything worth keeping -- just something else to clean up.

We can also say that a plant, person or idea has gone to seed. To go to seed is to "worsen in condition because of lack of care." This expression is based on the actual meaning of plants that "go to seed." They stop producing flowers and start producing seeds.

Two friends on their way to work stop for coffee and to "talk shop" -- they talk about work.

I want to stop for coffee before heading into work. Do you have time?

Sure. Actually, I want to hear about your new start-up. So, how is your new product launch going?

It's going better now. But I ran into a rough patch a few weeks ago.

Well, a man who worked for me was trying to steal my customers. After every meeting with a customer, he would pull them aside and try to plant seeds of doubt about whether my business was the right fit for them.

Wow, that's awful. What did you do?

It's a good thing his attempts to hurt your business didn't take root.

Actually, in the end, it only hurt him. Word got around and now people don't trust him. So, he hasn't been able to find another job. I saw him the other day and he looks awful. He has really gone to seed.

You know what they say: "You reap what you sow." If you do bad things, you will sooner or later have to deal the results.

That is so true. But now, I have another problem -- money. I used up all the seed money I had saved for the project.

I know you pretty well. I'll bet the farm that you will not let your business die on the vine.

No way. I have already found another investor. And I started farming out the art work to some university students. That will save me a lot of money.

Well, it sounds like you're really busy, but happy.

I love my work. You know, I was talking to an old college friend last night. We both sowed our wild oats when we were younger. Now, that we're older and, hopefully, wiser we are perfectly happy spending much of our time on work.

You know, I never did anything too crazy when I was younger. Maybe these restless feelings I have are my wild oats that I didn't sow. Maybe I'll quit my job and travel around Europe for a month!

That sounds fun. But let me plant a seed of caution -- before you quit your job, save up a lot of money and have another job waiting for when you get back.

Well that doesn't sound like a crazy, wild time.

Exactly. You're not in your 20s any more.

This one's on me. If you're going to be traveling around Europe, you'd better start saving your money now.

And that brings us to the end of Words and Their Stories. Hopefully some of these farm expressions will take root in your everyday English.

"You can have a lot of fun in a New York minute, but there some things you can't do in those city limits. There ain't no closing time, there ain't no cover charge, just country boys and girls getting down on the farm."

Anna Matteo wrote this story for VOA Learning English. Marilyn Rice Christiano wrote the text involving the origin of the word "farm." At the end of the story, Garth Brooks sings "Down on the Farm."

doubt – n. a feeling of being uncertain or unsure about something

neglect – v. to leave undone or unattended to especially through carelessness

talk shop informal phrase to talk about work: They like to talk shop during lunch.