How Can a Smelly Fish Help You Avoid the Truth?

Update Required To play the media you will need to either update your browser to a recent version or update your Flash plugin.
By Anna Matteo
04 February, 2017


Now, Words and Their Stories, a program from VOA Learning English.

On this show, we try to explain common expressions used in American English.

Today, we talk about a small, silvery fish, called herring. 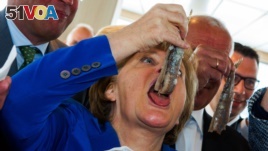 In some places, herring is a popular food. In the United States, herring is also part of a curious expression. We call unimportant information that is used to distract a "red herring."

For example, mystery writers often use red herrings as plot devices. In her book "The Sittaford Mystery," writer Agatha Christie gives many characters a reason for killing the rich Captain Trevelyan. But those reasons turn out to be red herrings. Christie used them to throw the reader off the scent of the real killer.

In a mystery, a red herring is something the writer presents as a clue, but actually isn't. Mysteries aren't the only places that use red herrings.

People who work in government or write about politics also commonly use this expression. Politicians are sometimes guilty of drawing people's attention away from serious issues by throwing out red herrings that they know will get a reaction.

As you can see, the expression red herring is useful ... but it is odd. How did herring turn red? And why does it mean something that is purposefully misleading?

The first part, about the color, is easy to answer.

Before modern transportation and cooling equipment, fish was difficult to ship to customers. It would go bad before reaching stores. So, people began curing fish for later use. They added salt to the fish or left it hanging in a smoky room. After this process, the fish skin would darken, changing to a reddish-brown color. In this way, some herring literally turned red.

In our examples today, however, a "red herring" means something that takes attention away from the real issue. How did it come to mean that? Well, language experts do not really agree.

Some word historians point out that these smoked fish have a very strong smell. So, they might have been used to train hunting and tracking dogs. They suggest the scent of red herring could trick a group of hunters and, more importantly, their dogs. In other words, red herring could throw even the best hunting dogs off track, making them likely to go in the wrong direction.

However, to other language experts, this explanation makes no sense. It suggests that people were following the hunters, secretly plotting to ruin their day. Who would do that? More importantly, there doesn't seem to be any written evidence to support that claim.

So, there are things we don't know about the origin of "red herring." But we do know this. From politics to the news to mysteries, we commonly use "red herring" in written English. But it can sound more formal and even a bit dated in everyday conversations.

There are some words that mean about the same thing but that are more commonly used in spoken English -- words like ploy, a ruse or subterfuge.

They all mean to trick someone or to send someone up the garden path, whether in search of stinky fish or anything else that is not the truth.

Now let's hear these tricky words in a short story.

Our story begins with a guy named Max. He works as a security guard at a famous museum. As a security guard, Max watches visitors to the museum as they come and go. He often wonders things about them. Where do they come from? Are they happily married? What do they do for a living?

One day, Max notices a very pretty woman visiting the exhibit he is guarding. He has seen her before. In fact, she often comes to see the rare jewelry exhibit – sometimes several times a week.

During one of these visits, she starts a conversation with Max. She asks if it is difficult being a security guard and if he ever gets bored. She introduces herself as Maria, a fashion designer.

When Maria comes to visit, she often talks with Max. "Maybe she likes me," he thinks.

Max thinks she is very interesting and wants to spend more time with her. During one of their talks at the museum, he finds out that she is studying Italian.

He lies and tells her he has always wanted to learn Italian. He is simply using Italian as a ruse. And it works! Max and Maria meet every Saturday afternoon in the museum garden to study Italian.

During the lessons, they also talk about themselves. Maria shares her dreams of one day showing her fashions in a museum. Max tells her many details about his security job. He jokes that it would be very easy to rob the museum.

Maria asks him if he could identify a robber. They describe what they think a robber would look like and laugh together.

Over the passing weeks, they learn more about each other. What Max doesn't learn, however, is that Maria is not as innocent as she looks.

Maria is actually an international jewel thief! Police from eight different countries have been searching for her the past two years!

Her latest goal is to steal the rare Black Diamond! This diamond is the most valuable diamond in the world and it is part of the exhibit that Max is guarding. All her attention on him was a subterfuge to learn more about the museum's security system.

One night after the museum closes, Maria makes her move. She enters the building using the security code that Max shared with her – his dog's name, Bones.

"When dealing with a beautiful woman, men can be so stupid," she laughs to herself.

She sneaks into the jewelry exhibit and destroys the movement-detecting alarms Max told her about. Then she walks up to the glass case protecting the Black Diamond and unlocks it with the key she stole from Max.

As she holds the diamond in her hands, she laughs, "The Black Diamond is mine!"

Just then the lights go on, an alarm sounds and a team of police run in.

They have caught her!

As a police officer handcuffs Maria, the lead police investigator comes into the room. Her surprise is so strong she is unable to speak.

He flashes his police badge and says, "Your stealing days are over, Maria! Or should I call you by your real name, Natasha Stealzolot!"

She yells, "I should've know learning Italian was just a ploy! How could I have been fooled by you, a simple police detective?!"

Max puts his badge back in his pocket and says, "You can think about that in prison where you'll be spending the next 15 years! Oh, and by the way, I speak perfect Italian. Arrivederci!"

How many red herrings can you find in this story? Let us know in the Comments Section.

ruse a trick or act that is used to fool someone

subterfuge the use of tricks especially to hide, avoid, or get something

make one's move – informal expression : to start doing something to achieve an aim or solve a problem

code – n. a system of signals or symbols for communication : a system of symbols (as letters or numbers) used to represent assigned and often secret meanings : a set of instructions for a computer

sneak – v. to move quietly and secretly in order to avoid being noticed

detect – v. to discover or notice the presence of (something that is hidden or hard to see, hear, taste, etc.) detecting – adj.

alarm – n. a device that makes a loud sound as a warning or signal

uniform – n. a special kind of clothing that is worn by all the members of a group or organization

handcuff – v. to put handcuffs on (someone) handcuff – n. a set of two metal rings that are joined together and locked around a person's wrists

flash – v. to show (something) briefly : commonly used with "badge" : <The officer flashed his badge.>

badge – n. a small object (such as a tag, pin, or metal shield) that is worn or held up by a person so that it can be easily seen, that has writing (such as a person's name) and often a picture on it, and that shows who the person is : <The policeman flashed his badge.>

by the way – informal expression : incidentally (used to introduce a minor topic not connected with what was being spoken about previously)