Words and Their Stories: Put Your Best Foot Forward!

Update Required To play the media you will need to either update your browser to a recent version or update your Flash plugin.
By Anna Matteo
28 January, 2017

On this program, we explore common expressions in American English.

Today we talk about a part of our body that is usually very busy – our feet! 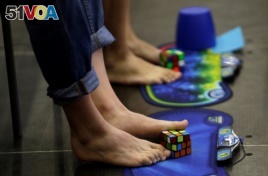 Feet help us walk, run, dance, and jump. The words feet and foot are also used in everyday speech.

For example, the English language has feet idioms that describe different kinds of people.

To be under someone's feet means to be troublesome. In other words, you are standing too close to someone and are getting in their way. Some adults criticize children for being under foot.

Speaking of children, if someone says their home will soon have the pitter-patter of tiny feet, it means the family is expecting a baby!

Now, people who are active do not let grass grow under their feet. They are never in once place for very long.

People who can think and take action at the same time are said to be able to think on their feet.

Some people appear to have it all. They have money, a good education, good looks, a great family and a large circle of friends. You could say they have the world at their feet. This means whatever they want seems to be there for them.

People who have both feet firmly on the ground are realistic and practical. They are not dreamy. You might say such a person is well grounded.

If you are a bad dancer, you might be accused of having two left feet. To dance well, it is better to have a right foot and a left foot.

Besides describing different people, feet expressions can be helpful when talking about jobs and careers.

Let me tell you about a man named Sam. He has worked at a government job for years. But now he is looking for a new career. He wants to do something he loves -- something exciting!

Sam loves skiing. He thinks that it would be fun to own a ski resort high in the mountains. But he knows nothing about operating a business. So, he decides to get his feet wet. In other words, he wants to get used to a new situation.

He joins an organization for resort owners and attends their conferences. He travels to ski areas all over the United States. This helps Sam get his foot in the door.

Having a foot in the door is a starting point, an opportunity. This expression comes from people selling things door-to-door. They would block the door with their foot so people couldn't close the door on them.

The more Sam learns about the ski business, the more excited he gets.

All this information is a great start. But it isn't enough to make his dream a reality. He finally gets a firm foothold when he finds some mountain top property for sale in West Virginia. He gets a loan from a bank and buys the land! Getting a foothold is finding a starting point that makes further progress possible.

Sam works hard with ski slope designers and engineers. At the end of each day, all of them are dead on their feet. They are so tired that they have trouble standing up. So, Sam and his team decide to put their feet up. They rest and take it easy.

Finally, Sam faces opening day – the day he has been dreaming about.

But the night before his business is to open, Sam gets cold feet. He is so nervous that he wants to call everything off. He's afraid that his resort will be a total failure. To get cold feet means to become afraid about something at the last minute.

But then, Sam takes a deep breath and calms down. He gets his feet back under him. He decides that his opening day will be wonderful!

However, there is a problem.

Soon skiers are happily skiing down the slopes! It is a great success! 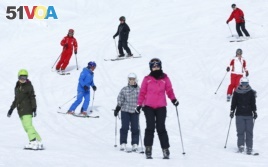 Sam's ski resort has been open for three seasons. And every year it is easier for Sam to find his feet in this new and exciting career. It is easier for him to get used to his new situation.

Now, Sam's ski resort is popular with skiers and he has a successful new career.

To thank his friends and family who helped him during that difficult first year, he invites them to the resort for a weekend of skiing. And, of course, he footed the bill. This means he paid for everything!

And that is Words and Their Stories. Hopefully this story has given you a firm foothold on using feet and foot expressions.

practical – adj. logical and reasonable in a particular situation

slope – n. an area of land on a mountain that is used for skiing

engineer – n. a person who has scientific training and who designs and builds complicated products, machines, systems, or structures : a person who specializes in a branch of engineering

fire – v. to dismiss from employment

hire – v. to engage the personal services of for a set sum