Pure 'Madness' on Words to the Wise

Update Required To play the media you will need to either update your browser to a recent version or update your Flash plugin.
By VOA
17 March, 2017


We are getting wordy once again in the Learning English studio. I'm Caty Weaver and here with me are reporters Ashley Thompson and Dan Friedell.

Hello, you two. Thanks for coming in! We are going to try another installment of "Words to the Wise," our new program where we discuss, explain, and learn very current words and terms.

It's...it's that time of year again. The most wonderful time of the year...

Yes, Ashley, happy birthday, again. But actually that is not the event Dan is talking about. March Madness has begun. I thought we should go over some related language.

Ah, yes, the big college basketball championship. It begins in the middle of March. And people definitely go "mad" over it.

But not mad as in angry, right Dan?

Well, Caty, some people might get a little mad if their favorite team does poorly. But March Madness refers to the wild nature of the tournament. There are so many teams and a lot of games ending at the same time -- dramatic endings, especially! We'll hear about some of those endings later on.

And the "madness" also refers to the wild excitement the tournament causes. Actually, college basketball, or NCAA [National Collegiate Athletic Association] basketball, is very popular here in the United States. In many parts of the country, it's a lot more popular than the NBA even, or National Basketball Association.

Yeah. So, anybody checking out American news and social media will likely face some of the "madness" online.

That's right, Caty. The tournament really begins on Selection Sunday, and that's when a committee decides which universities' teams will get into the tournament. They start out with 68 teams, and then it gets down to the championship game, which doesn't actually happen in March. It happens at the beginning of April. So, we go from one Sunday in March all the way to the beginning of April.

Wow, Dan...March Madness, Selection Sunday. There sure are a lot of alliterations involved. Those are phrases where many or all of the words start with the same letter or sound.

And we haven't talked about the "Final Four" yet!

So, we start out with 68 teams in the men's tournament and 64 in the women's. And then they start dancing, right Dan?

Yeah, I've heard everyone say 'Oh, this school or that school...they're all going to the Big Dance.'

What is this "Big Dance?"

Well the Big Dance...that's just what they call it for fun. They don't dance. They play basketball. It's like a big party for a few weeks. Each of the teams are ranked, based on their performances during the regular season. And those rankings are called "seeds." Each group of teams is put into one of four regions. And each region has the number-one seed all the way down to the 16th seed.

Um, just to be clear, Dan, the word "seed" in this case does not relate plant life, right?

So, in other words, you want to spread around the competition to produce a better sporting event. Kind of like a farmer spreads seeds for a good crop.

So, it does come back to that literal meaning that I mentioned.

Mhmm. So, before it began, a lot of people in the United States tried to pick which team would win each game of the tournament.

That's right, Caty. That's called the "bracket." And it's a chart. It shows all of the teams and their projected next-round opponent. But nobody knows for sure which team will win the subsequent games. So you choose the winner, the team that you think will win, and filter it all the way down to the Sweet Sixteen, and the Elite Eight, and the Final Four, and all the way down to the championship game. 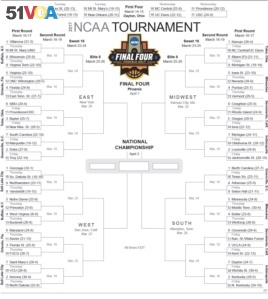 Okay, so it sounds like someone here has his own bracket all finished up!

Wait, um, why don't people just pick the higher-seeded team to win each game when they're filling their brackets out? I mean, that's what I would do.

Well, it rarely works out that way. Sometimes two or three of the best four teams will make it to the Final Four. But usually there's a team that's unexpected.

Okay, so there's that "Final Four" phrase again, Dan...Can you explain that to our audience?

So the Final Four, those last four teams that make it, that's the semifinals of the tournament. And the previous round is the quarterfinals. And we call that the Elite Eight.

And before that you have the Sweet Sixteen!

Oh my gosh. So you might say there are a lot of "upsets" along the way, then?

Right, an upset is when one team that's favored doesn't win the game. The "underdog" team upsets the favorite. And some of those upsets happen with dramatic moments at the end of the game. Those are called "buzzer beaters."

So, it's not violent, usually! The "buzzer" is a device that makes a loud sound to signal end of play. And a "buzzer beater" is a moment at the very end of the game, when that game can be decided with one just shot that goes into the basket before the buzzer.

It might even go in after the buzzer, right? The shooter has to have let go of the ball before the buzzer...buzzes.

Yes. A really exciting game might combine a "Cinderella Story" team and a buzzer beater.

Cinderella? Are we going to Disneyland?

Tell her. Go ahead, Dan. Tell her.

So, a Cinderella team is a team that is not expected to do well. Maybe they don't have the best record. Maybe they were not the best team in their conference during the season. But usually something happens where they start winning some games, they get confident, and it's a surprise...like Cinderella getting to the ball and winning the prince's favor.

Okay you guys, so do want to tell the world about your brackets, who've you got picked? Who do you think, Dan, will "cut down the net" this year?

Cut it down? What...is this destructive all the sudden?

Actually, it is.There's a tradition where the winning team takes scissors and cuts down the net so that they can put it in their trophy case back at their university for future generations of fans to admire.

Oh, well, in that case, the net will go home to the University of Kansas.

Oh yes, Dan? Who do you think's gonna cut down the net?

I think I'll go with Villanova, which is a small school near Philadelphia, Pennsylvania. They were the champions last year, in one of the most exciting championship games ever -- won on a buzzer beater! And I think they can do it again this year.

Okay, cool. Well I have no idea who might win. I'm not even sure -- now I know two teams that are actually involved in the tournament --

Okay, I didn't know that! But I will say, I will watch the games, 'cuz I love watching basketball. So I'm gonna watch this weekend.

Let us know what kinds of words or topics you are interested in hearing about for next week's edition of Words to the Wise!

madness - n. behavior or thinking that is very foolish or dangerous

committee - n. a group of people who are chosen to do a particular job or to make decisions about something

alliteration - n. the use of words that begin with the same sound near one another

literal - adj. involving the ordinary or usual meaning of a word

bracket - n. a diagram representing the rounds of games in a sports tournament, especially as used for making predictions about its outcome.

seed - n. a player or team that is ranked as one of the best in a competition (such as a tennis tournament) in order to be sure that the best players or teams do not play against each other in the early part of the competition

set - n. a group of similar things that belong together

projected - v. to plan, calculate, or estimate (something) for a time in the future

subsequent - adj. happening or coming after something else

filter - v. to remove (something unwanted) by using a filter; often used figuratively

upset - n. an occurrence in which a game, contest, etc., is won by a person or team that was expected to lose

upset - v. to win a game that you were expected to lose

underdog - n. a person, team, etc., that is expected to lose a contest or battle

buzzer - n. an electric device that makes a loud sound

conference - n. a group of sports teams that play against each other and that are part of a larger league of teams

net - n. a device that is attached to a frame and that is used as the goal in some games (such as soccer, hockey, or basketball)

trophy case - n. a place where people keep objects that are given as a prize for winning competitions