How to Win an Election

Update Required To play the media you will need to either update your browser to a recent version or update your Flash plugin.
By Anna Matteo
18 February, 2017


And now the VOA Learning English program -- Words and Their Stories.

On this show, we explore common expressions in American English.

Today we talk about expressions related to the biggest contest in the United States – the election of the American president. 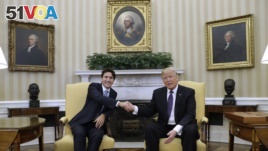 After winning his election, President Donald Trump meets other world leaders. Here, he is pictured with Canadian Prime Minister Justin Trudeau in the Oval Office of the White House in Washington, Feb. 13, 2017. (AP Photo/Evan Vucci)

Well, except for the first election. That was not much of a contest. On February 4, 1789, all 69 members of Congress voted for George Washington.

Supposedly, Washington didn't even want to be president. John Adams was the runner-up. So, according to the rules at the time, Adams became Washington's vice president.

Elections these days are much harder to win. They can last for years and cost millions and millions of dollars. So it is not surprising that there are many expressions to describe the race for the White House. That expression, in fact, is one of them.

We often call political elections races, a word you probably know from sports. Many expressions we use for political campaigns are borrowed from sports competitions. In fact, sometimes we just cut to the chase and call the presidential election, a horse race.

If the race is close, we can say the candidates are neck-and-neck. This horse racing term means the two candidates are nearly tied in the polls and a winner is difficult to predict. We call such a race – political or otherwise – a dead heat.

In the early part of an election cycle when a party is picking its nominee, usually many candidates are in the running. Sometimes a candidate pulls away from the pack and becomes the clear favorite.

These two terms also come from horse racing. So does down to the wire.

In a horse race, the horses race to the finish and run through a wire as they cross the finish line. A presidential race that is down to the wire is very close. The only way to know the winner is to wait for all the votes to be counted.

If a candidate wins the election by a large margin -- that is to say won by many, many votes -- he or she has won hands down. We also say the race was a landslide. Or you could say the race was simply no contest.

These expressions all mean a candidate won easily.

But if a candidate loses an election by a big margin, we could say that campaign got blown out of the water, as if by a submarine torpedo. Or we might say simply that the candidate got crushed at the polls. More informally, we might also say the candidate got beat like a rug, which is visually entertaining.

Some candidates lose an election because they are unwilling to toe the party the line. In other words, they refuse to go along with the rules and standards of their own political party. This may upset the candidate's base -- the people who usually support that party.

The opposite of toeing the party line is reaching across the aisle. In the U.S., the two major parties are the Democrats and the Republicans. In this expression, the "aisle" refers to the actual physical walkway that divides the legislative halls. Members of the two parties sit on opposite sides.

So "to reach across the aisle" means to make an effort to negotiate with members who are not in your party. Many politicians win elections because of their willingness to work with members of the opposing party. On the other hand, some politicians lose for the same reason.

Voters can, sometimes, be very difficult to predict.

And that brings us to the end of another Words and Their Stories.