Update Required To play the media you will need to either update your browser to a recent version or update your Flash plugin.
By VOA
04 March, 2017


Hello and welcome to another Words and Their Stories, from VOA Learning English.

Each week we tell the story of words and expressions used in American English.

Today, we talk about two phrases that were ripped from the headlines, meaning they both came into the language from news events that were covered extensively in the press.

The first is Stockholm syndrome. Stockholm is, of course, a big city in Sweden. Syndrome is a condition. 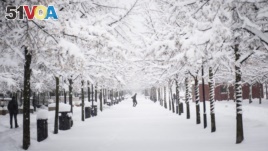 Stockholm is a city in one of the featured expressions. Here, a woman walks during a snow blizzard in Stockholm, Sweden, November 2016.

Stockholm syndrome is a type of brainwashing, a psychological condition. It describes a situation where a person held captive develops positive feelings toward their captors.

This expression comes from a failed bank robbery in Stockholm, Sweden. In August of 1973 bank robbers held four employees captive in the bank for six days.

In time, the captives developed a strong connection with their captors. One captive allegedly said she was afraid the police would try to rescue them and endanger the captors.

You may hear the phrase Stockholm syndrome in news reports where kidnapped people refuse to leave their captors after living in captivity for a long time. Fearing for their lives, these people have learned how to survive the best way they can. Connecting with their captors is their coping mechanism.

We also use Stockholm syndrome to describe people who stay in unhealthy and sometimes even abusive relationships.

A famous example of Stockholm syndrome here in the U.S. relates to a wealthy heiress named Patty Hearst. In 1974 a group called the Symbionese Liberation Army kidnapped Hearst, the 19-year-old grand-daughter of a wealthy newspaper owner.

Several weeks after her kidnapping, Hearst helped her captors rob a bank in California. Then she ran from authorities. Finally, the Federal Bureau of Investigation arrested Hearst, and lawyers charged her with armed bank robbery.

Hearst said she was a victim of brainwashing. She claimed she was abused by her captors and afraid for her life. Many professionals said she suffered from Stockholm syndrome. The court, however, did not agree. She was sentenced to 35 years in jail, but she only served two.

With help, people who are brainwashed can unlearn this coping mechanism. However, recovery is much more difficult for those who have drunk the Kool-Aid.

Let's say someone believes in something with all their heart and soul. That something can be a social cause, a political movement or the person in charge. If they are so wrapped up in the cause, movement or person – to the point where they are unable to think for themselves – we say they have drunk the Kool-Aid.

But what is Kool-Aid and how does drinking it relate to brainwashing?

Kool-Aid is a flavored, sweet drink that was once very popular with American children. However, to drink the Kool-Aid is to accept the beliefs of another person or organization completely.

This expression comes from a very dark, disturbing event that happened in 1978.

An American named Jim Jones was operating a utopian community in Guyana, South America called Jonestown. But according to former members and eyewitnesses, Jonestown was not a utopia. It was a cult and a prison. Members were not allowed to leave nor were they fed properly. And Jones claimed the role of father figure over everyone.

Former members of the cult who managed to escape asked the U.S. government to get involved. So, U.S. Congressman Leo Ryan and several journalists went to Guyana to investigate. At the airport as the group was preparing to leave, a cult member shot at the group. On the runway, he killed Ryan, several journalists and a fleeing cult member.

Before the U.S. government could act, Jim Jones asked his followers to kill themselves by drinking a sweet, flavored beverage. The drink contained poison. More than 900 of his followers drank it -- some willingly, some forced.

The massacre led to the expression "don't drink the Kool-Aid."

As an historical note, the beverage that contained the poison was not actually Kool-Aid but another similar brand called Flavor-Aid. This detail, however, does not change the expression. Nor does its terrible origin stop people from using it.

In fact, in 2012 editors at Forbes included "drink the Kool-Aid" in that magazine's List of Most Annoying Business Jargon.

Despite the dark origins of both "drink the Kool-aid" and "Stockholm syndrome," they are both used today in serious and non-serious situations.

captive ­– adj. captured and kept in a prison, cage, etc.

captor – n. someone who has captured a person and is keeping that person as a prisoner

captivity – n. the state of being kept in a place (such as a prison or a cage) and not being able to leave or be free : the state or condition of being captive

coping mechanism – n. Psychology : an adaptation to environmental stress that is based on conscious or unconscious choice and that enhances control over behavior or gives psychological comfort.

heiress – n. a girl or woman who inherits a large amount of money

wrapped up – adj. If someone is wrapped up in a particular person or thing, they spend nearly all their time thinking about them, so that they forget about other things that may be important.

utopian – adj. impossibly ideal : utopia – n. an imaginary place in which the government, laws, and social conditions are perfect

cult – n. a small religious group that is not part of a larger and more accepted religion and that has beliefs regarded by many people as extreme or dangerous

father figure – n. an older man who is respected and admired like a father

massacre – n. the act or an instance of killing a number of usually helpless or unresisting human beings under circumstances of atrocity or cruelty