New 'Words to the Wise' from Merriam-Webster

Update Required To play the media you will need to either update your browser to a recent version or update your Flash plugin.
By VOA
02 March, 2017


The American English dictionary Merriam-Webster recently added a lot of new words to its online site.

Learning English reporter Bryan Lynn looked into the changes. He's joined me in the studio to talk about some of the new words. 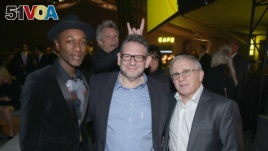 FILE - Singer Jon Bon Jovi photobombs a group photo of, from left, Aloe Blacc, Lucian Grainge and Irving Azoof at a gala in Nov. 5, 2015. (Photo by Matt Sayles/Invision for City of Hope/AP Images)

First off, how often does Merriam Webster add words? Is this a yearly event?

No, actually it's not. The last time the company added new words online was 2014. But an editor at large, Peter Solokowski, said Merriam Webster had been "watching" some of the added words for many, many years. Others, he said, were much newer in use.

So where do they come from?

Everywhere, really. I mean the new terms cover areas including science, technology, sports, pop culture. Most will probably be familiar to you.

Well, how about the verb "binge-watch?"

Oh yes. I binge watch television shows sometimes...always! That means to watch many episodes of a series in a short period of time. To binge, in this case, means to do a lot of something in a short amount of time.

Right...so in this case, I guess, watching one after the other for a few hours straight. Some people might watch a whole season of a show over a few days.

So here's another from the list you collected: Seussian. Some Learning English fans outside America might not know this one.

Yeah, so Seussian is an adjective that refers to the American children's book writer known as Dr. Seuss. He wrote these fantastical books for young children that included fun rhymes and colorful pictures.

Like "The Cat and the Hat" and "Green Eggs and Ham."

"‘I will not eat them, Sam-I-Am.'" The books made you laugh but they also helped a lot of kids learn to read. So anything that reminds a person of a Dr. Seuss world could be Seussian."

Okay. "Green Eggs and Ham" was the first book I ever read, actually. Another one on your list is photobomb. That's when someone jumps in front of a camera uninvited. It's usually done as a joke. I've seen some pretty funny photos that were the result of a really good photobomb!

Right, yeah. Photobombing is more of a prank. But, you know, it's not meant "to throw shade on anyone."

Oh, so I guess that is another newly added phrase, to throw shade?

Yes, it is. So, it is a slang expression that means to publicly express disrespect or dislike for someone. But to "throw shade" the insult or offense has to be subtle or understated.

Okay. So, among the new words are slang expressions, as well...

Correct. So, one of those is ghost.

We all know what that means as a noun, but...

Right, but as a verb it means to abruptly cut off contact.

Mhmm. I have friends who have been quite hurt by people who have just ghosted on them, without any explanation. It's not a very nice thing to do.

Right, so I mean, with the slang words you could even pile on top, right? You could throw shade and also ghost the same person.

Well, microaggression is a noun. It's a comment or action that subtly and often unconsciously or unintentionally expresses a prejudiced attitude toward a member of a minority group.

Okay, so that sounds a little more serious than "ghosting."

Alright, so this next word is not slang and I'm not really sure most people know what this one means: prosopagnosia.

Yes, so this is a noun and it does have a scientific meaning -- the inability to recognize faces.

Exactly, that's what it would be. Blind to faces.

Well, this has been really interesting, Bryan. Thanks for joining me in studio here. And to our listeners, let us know if you liked this and maybe we can do more of this in the future.