Update Required To play the media you will need to either update your browser to a recent version or update your Flash plugin.
By Anna Matteo
25 February, 2017

On this program, we tell about common expressions in American English and explain how to use them.

Today we talk about expressions involving Los Angeles, California. Los Angeles is the biggest city in the western United States. It is the second largest U.S. city in terms of population, after New York City.

So, Los Angeles is a huge city with people from many different walks of life. But for today's show we are going to focus on the dream–like, or ethereal, part of Los Angeles.

Los Angeles -- or simply "L.A." for short -- can be an unreal place, a place like no other. For some it is a city where big dreams come true; for others it is where their dreams die in cloud of smog.

L.A is home to the U.S. motion picture and television industries. Some Americans like to call it The Entertainment Capital of the World.

The L.A. neighborhood best known for films and movie stars is Hollywood. Millions of people visit Hollywood each year. No trip to Los Angeles is complete without seeing the word "Hollywood" spelled out in huge letters on a hillside.

And many actors dream of having their name added to Hollywood's Walk of Fame. 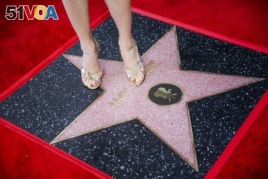 Amy Adams attends a ceremony honoring her with a star on the Hollywood Walk of Fame, Jan. 11, 2017, in Los Angeles.

This brings us to a nickname for Los Angeles, one that is also commonly-used as an expression: la-la land.

La-la land can be any place that is fun, far from serious, and out of touch with reality. You can use the expression when talking about the mental state of someone who does not understand what is really happening. You might say that person is "in la-la land."

"La La Land" is also the name of a 2016 movie. It tells the story of a man who wants to be a musician and a woman who wants to be an actress. They meet and fall in love in Los Angeles. The name of the movie suggests both the city's nickname and the state of being out of touch with reality.

Now, there are many types of industries: automobile industry, farming industry, computer industry, and so on, and so on. However, when people in L.A. say they work in the "Industry," they only mean one thing – making movies. Like any industry, the movie industry has its own set of terms and expressions. Some are useful outside of La La Land.

Not only actors, many screenwriters dream of making it big in Hollywood. They write one screenplay after another, hoping for a big break – the opportunity of seeing their story made into a film and played out on the silver screen.

To get money to make that happen, these writers need to pitch their stories. A pitch is a short description of a project you've been working on or an idea you have. You pitch your idea to someone who can help you with money or provide contacts to make it happen.

Writers usually form a partnership with someone in the Industry such as a producer or director. These partnerships then pitch the project to investors.

So, in Hollywood, the pitch is about scripts and making a movie. But you can pitch anything that needs financial backing. You can even say you are pitching yourself if you are looking for a job.

But back to the movies -- let's say your pitch is successful. The first person you talk to likes your idea. So, you move up the line. You get to talk "Bigs." In Hollywood, these are the people with all the influence and money.

In other work situations, you might call them big wigs, decision makers or simply the "money people."

No matter what you call them, if investors like your pitch, they may green light your project.

This would be the best news. In traffic, a green light gives the driver permission to move forward. In movies and in all other industries, getting the green light for a project or having your project green lighted means you have permission and support to make it happen.

After you get the green light, you make your script into a movie. You've made the big time! Again, you can make the "big time" or make it big in any industry, not just in the movies.

Anna Matteo wrote this story for VOA Learning English. Facts about the city of Los Angeles and its entertainment industry were written by Shelley Gollust. George Grow was the editor.

The two songs used in this program are "Hooray for Hollywood" sung by Doris Day and "I Love L.A." sung and written by Randy Newman.

walks of life - phrase used to refer to people who have many different jobs or positions in society ; usually used with from

ethereal – adj. of or relating to the regions beyond the earth

smog – n. a fog made heavier and darker by smoke and chemical fumes

silver screen – n. a screen in a movie theater : movies in general

producer – n. someone who is in charge of making and usually providing the money for a play, movie, record, etc.

studio – n. a place where movies are made : a company that makes movies