Update Required To play the media you will need to either update your browser to a recent version or update your Flash plugin.
By Adam Brock
08 August, 2015


A growing number of American universities are dropping the entrance exam requirement. More than 800 universities now allow students to apply without an SAT or ACT test score. The SAT and ACT are the two major college entrance tests in the United States.

For years, colleges have used these tests to help measure an applicant's academic skills. But more universities are becoming "test optional." Students who apply to test-optional schools can choose whether they want to include test scores in their applications.

George Washington University in Washington, D.C. is one of the latest schools to adopt a test-optional admissions policy for most of its applicants. It is the largest private university to drop the test requirement. 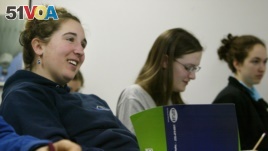 Karen Stroud Felton is the Dean of Admissions at George Washington University. She said in a statement that the university "had concerns that students who could be successful... felt discouraged from applying if their scores were not as strong as their high school performance."

Each of America's more than 3,000 colleges and universities has its own admission requirements. At some colleges, test scores are very important. Others are more interested in an applicant's life experience, teacher recommendations, community service, and talents.

High school GPA, or grade point average, is another way to judge a student's ability. A GPA of 3.5 or higher (on scale from 0 to 4) is considered good. For international applicants, universities have specialists review the academic standards of different countries and convert them to GPA equivalents.

Jennifer Tkacz is the Director of International Admissions at George Mason University. It is the largest test-optional university in the United States. She explains why the school went test-optional in 2006.

"The university administration felt that for many students, their test scores aren't necessarily a reflection of their academic strength and the GPA is a much better indicator."

"Generally, a strong curriculum that prepares students for college we feel is a much better indicator of how they will succeed. They've been in the classroom, they been taking challenging coursework, they've been applying that coursework to tests, writing papers, and participating in classroom work. And we think reviewing that information would give us a better idea of how they would perform here at Mason--versus sitting down one day, one time, taking a test."

Cheryl O'Brien owns a test preparation company in New York. She says wealthy students have a major advantage on college entrance tests. They can spend months or even years preparing for the test with private teachers. Students with more motivation than money can practice with study guides. But self-study, even for highly motivated students, is not the same. Ms. O'Brien explains:

"It's never going to be as good as working with somebody when you can have feedback. Books don't talk back to you. Books don't explain to you what's going on and how to understand something."

A 2010 study in the Harvard Educational Review argued that the SAT used vocabulary that was more familiar to white test takers. The study said that the SAT "appears to be biased against the African-American minority group." Fair Test, an anti-testing organization, says the ACT's fast-paced multiple-choice format favors male test takers.

Ryan Lessing is a student at Brown University, a highly selective school that requires a test score. He says the SAT is not perfect, but it serves an important purpose.

Mr. Lessing says the SAT is not the cause of educational inequality. He says the difference in test scores just reflects the deep inequality in American society.

"Students from lower income families just don't have access to the same educational resources across the board. And that is a real problem. And that, I think, is the problem we should be discussing in trying to address...the SAT makes a convenient villain."

James Montoya is a vice president of the College Board, the organization that owns and publishes the SAT. He says the SAT is very important for international students.

"Given the globalization of admission with more students applying from secondary schools that many US colleges and universities are not familiar with, certainly standardized test scores continue to be a valuable tool, given that it provides admission officers with great insight into a student's ability to do well."

Mr. Montoya says that the majority of colleges in the US still require test scores. "You will find it interesting to know that even those institutions that are test-optional [often] require students from particular areas--those applying for special scholarships, those with lower GPAs--to submit SAT scores."

Mr. Montoya adds that test-optional policies have not led to increased racial diversity on college campuses.

A study by Bates College tracked students from 33 test-optional schools. The study compared students who sent SAT scores with students who did not send scores. It found almost no difference in college grades or graduation rates.

A new version of the SAT will come out in the spring of 2016.

Now it's your turn. Do you think that college entrance exams are fair? Leave a comment below.

Adam Brock wrote this story for VOA Learning English. Hai Do was the editor.

SAT - n. a standardized test widely used for college admissions in the United States. It is owned and published by the College Board.

ACT - n. a standardized test widely used for college admissions in the United States published by ACT, Inc. A competitor to the SAT.

equivalent – adj. having the same value, use, meaning, etc.

feedback – n. helpful information or criticism that is given to someone to say what can be done to improve a performance, product, etc.

neutral – adj. not supporting either side of an argument, fight, war, etc.

benchmark – n. something that can be used as a way to judge the quality or level of other, similar things

rigor – n. the quality or state of being very exact, careful, or strict

consistent – adj. of the same quality

inequality – n. an unfair situation in which some people have more rights or better opportunities than other people

across the board – adv. applying to all the individuals in a group

villain – n. a character in a story, movie, etc., who does bad things

evaluate –v. to judge the value or condition of (someone or something) in a careful and thoughtful way

insight – n. the ability to understand people and situations in a very clear way