Update Required To play the media you will need to either update your browser to a recent version or update your Flash plugin.
By VOA
20 April 2020


Argentina has more mental health professionals per person than most other countries in the world. Many Argentines depend on therapists in their daily lives.

Now, they are finding new ways to bring their therapists into their homes -- through phone calls and meeting apps. The South American nation has been under a government-ordered quarantine since the middle of March. The order is set to last until at least April 26. 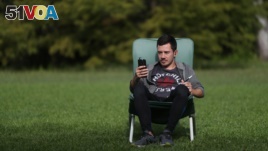 Claudia Borensztejn is president of the Argentine Psychoanalytic Association, or APA. She told Reuters, "We are receiving many calls, the situation opens many new doors."

Borensztejn said that discussions between therapists and their patients are now almost all about the coronavirus outbreak. She said many patients report having panic attacks, anxiety about being stuck inside, trouble sleeping, and extreme worry about their economic situation.

A culture of therapy is well established in Argentina. Many people make weekly trips to their mental health provider, said Borensztejn. Now those meetings are happening in different ways.

"We're ‘entering' patients' houses, which would never have happened previously," she said.

The coronavirus outbreak has led to more than 2.4 million confirmed cases and more than 160,000 deaths worldwide. The World Health Organization has warned countries that the crisis is "generating stress" worldwide.

Borensztejn's organization has opened a free telephone line to serve patients in emergencies. Phone operators can direct callers to professionals who can take new cases and offer any necessary treatment. Borensztejn says many calls for help have come from doctors.

Romina is a 47-year-old businesswoman living in the capital, Buenos Aires. She has two young children. She has been going to therapy for many years. She wants to continue therapy at home -- even though finding a quiet place to talk is not always easy.

"I go to the car so I'm not distracted and so I have more privacy," said Romina, who wanted to use only her first name. She and her therapist talk by phone, which she says is easier than by computer.

Psychology is an important part of Argentine culture, especially psychoanalysis. Psychoanalysis is a treatment method developed by the famous Austrian brain doctor, Sigmund Freud. Patients under the treatment are to talk freely and at length to their therapists, especially about early life experiences.

On the streets and in schools across Argentina, it is common to hear therapy terms used in everyday discussions. The country has around 222 psychologists for every 100,000 people, a 2017 WHO mental health report found. That compares to less than 30 in the United States, 49 in France, 12 in neighboring Brazil and 103 in Australia.

Marisa Chamizo is a psychoanalyst based in Buenos Aires. She said the fact that her country has so many mental health professionals shows that, in her words, "we are a population that is more in touch with our own difficulties...That is why we look for help."

Romina said many of her current therapy meetings center on the pressures of balancing job, childcare and housework, as well as the effects of social separation.

"To be honest there have been times when I haven't been okay," she said. Talking to her therapist, she added, helps "get things off my chest."

per - prep. for each

therapist - n. a person trained in methods of treating illnesses especially without the use of drugs or surgery

panic - n. a state or feeling of extreme fear that makes someone unable to act or think normally

distracted - adj. unable to think about or pay attention to something : unable to concentrate

psychology - n. the science or study of the mind and behavior

get something off your chest - idiomatic expression. to talk to someone about something that has been worrying you, so that you feel better about it.