Update Required To play the media you will need to either update your browser to a recent version or update your Flash plugin.
By Jonathan Evans
11 September 2021


Officials in Australia's state of New South Wales announced a plan earlier this month to protect endangered plants and animals in the state's national parks.

Environment Minister Matt Kean said the plan is to help fight against, what he called, the worst extinction rate of mammals in the world.

Animals such as Koalas, rock wallabies and a rare tree called the nightcap oak are some of the species to be protected. The effort is being called the state's zero extinction plan. 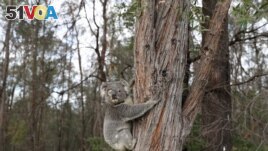 FILE - A rescued koala named Ernie climbs up a tree as he is released back into his natural habitat, following medical treatment for chlamydia, where he had to have one of his eyes removed, in Grose Vale, Sydney, Australia, July 25, 2020.

More than 90 endangered species at risk from pests, wildfires and climate change will be given greater legal protection. There are new rules related to birds, frogs and reptiles and rare trees, including the dwarf mountain pine.

The plan includes a number of areas where meat-eating animals will not be permitted. Officials will be able to make conservation and fire-supervision plans to protect plants and animals. For some species there is little time to waste. Some population groups of the brush-tailed rock wallaby in Warrumbungle National Park have fallen to just 10 animals.

Rachel Lowry heads the Australian office of the World Wildlife Fund, an international environmental group. She said the New South Wales plan is the kind of plan needed to fight against plant and animal extinctions. "Now, I would love to see that being drawn actually for the whole nation, and not just for species in protected areas and in this case species in protected areas in New South Wales only," she added.

Officials in New South Wales have warned that one million species around the world face extinction in the near future.

extinction –n. the state or situation that results when something (such as a plant or animal species) has died out completely

mammal –n. a kind of animal that feeds milk to its young and has hair on its body

pest –n. an animal or insect that causes problems for people especially by damaging crops

conservation –n. the protection of animals, plants and natural resources