Update Required To play the media you will need to either update your browser to a recent version or update your Flash plugin.
By VOA
26 August, 2015


It all started with a question from a student. The year was 1965. Betty Azar was teaching her first English as a Second Language class at the University of Iowa.

A student from the Middle East asked Ms. Azar, "Why can't I put a in front of water?' As in ‘I drank a water.'"

Ms. Azar did not know the answer.

"I had never thought about it. I thought it was an absolutely wonderful question and from there on out, I wanted to know the answers to the questions that second language learners had about English. I went home and I looked in reference books. I found the answer. And the next day I went to class and I gave him an answer about count and non-count nouns, which I had never heard of. That's how I started my grammar-teaching career." 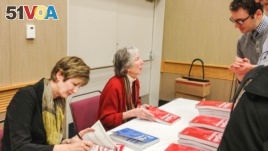 Fifty years and 10 million book sales later, Betty Azar has become a legend in the world of TESOL, or Teaching English to Speakers of Other Languages. Some call her "the Mick Jagger of grammar," comparing her to the lead singer of the British rock band The Rolling Stones. Generations of English teachers and learners have come to love her classic book, Understanding and Using English Grammar. The blue grammar guide can be found in language schools throughout the world. No American has sold more grammar books than Ms. Azar.

Ms. Azar never expected to become a star in the TESOL field. She studied European languages in college. She started her career teaching writing courses for first-year American college students. One morning, her boss asked her to teach an English class for foreign students. She knew nothing about TESOL, but she did not want to disappoint her supervisor. She taught her first course later that same day.

"I have no background in linguistics or no degrees in teaching English as a Second Language. This all happened on the job. I learned as I went. I learned from the students and went on from there."

TESOL was just beginning as an academic field in the 1960s. It was not yet a college major and there were few study materials available.

"The books available for teaching English were few and far between, maybe two bookshelves' worth... Just like so many other ESL (English as a Second Language) teachers, I made up my own lessons. I started writing for my own classes and it turned into a book."

In 1978, a representative from a publishing company stopped by her office. He asked if she wrote material for her own classes.

And he said, ‘Well, would you like to write a book?'

And he said, ‘That's who writes books.'"

Ms. Azar agreed to write a book. She had to throw out everything she had written for her classes because it might have come from other books. She made a series of note cards with examples and explanations of grammar structures that interested her. Over several years, Ms. Azar turned her notes into a book.

The book, called Understanding and Using English Grammar, was first published in 1981.

"I was hoping that I would make enough money from the book that I could get a new sofa and a new carpet for my living room. So I was absolutely astounded when the number of teachers out there who found that what I had been doing in class was helpful for them too."

English teachers loved the grammar textbook. However, many in the academic world thought that teaching grammar was old-fashioned. There is still much debate among educators about whether it is important to teach grammar. Today, most native speakers learn very little about English grammar in school.

". . .There's the whole notion of not teaching grammar that started back in the 60s in the U.K. and the U.S. has, I think, been deleterious, not good, not only for non-native speakers learning the language, because they do learn faster and better with a grammar component, but I think it has also harmed native speakers...The research will show that an understanding of your own language, its own grammar allows you to...use the language more effectively."

Azar's book was a major success. She was able to buy more than a new sofa and carpet for her living room. In the following years, she wrote two more grammar books for lower-level English learners. The blue book, Understanding and Using English Grammar is now in its fourth edition. Written with co-author Stacey Hagen, the fourth edition includes listening and more interactive classroom exercises.

Even with her success as an author, Ms. Azar still considers herself a teacher and practitioner, not a researcher or academic. But she wants to build a bridge to connect the practical and the academic sides of the TESOL field.

"To bring the two sides together can only be a good thing for our students as we move the teaching of language forward. We don't have all the answers yet, by any stretch of the imagination, about how language is applied and second language in particular. We've got a lot to learn yet."

Betty Azar is mostly retired now, but she still speaks at conferences and sponsors research and professional development. She lives with her husband in the state of Washington.

Ms. Azar and Ms. Hagen are currently working on the fifth edition of Understanding and Using English Grammar.

Ms. Azar has some simple advice for English learners.

To learn some grammar tips directly from Betty Azar, see the article "The Sounds of Grammar," which she wrote for Everyday Grammar.

TESOL – n. Teaching English to Speakers of Other Languages, the teaching of English as a second language

carpet – n. a heavy fabric cover for a floor

old-fashioned – adj. no longer used or accepted : replaced by something more recent

component – n. one of the parts of something (such as a system or mixture) : an important piece of something

practitioner – n. a person actively engaged in an art, discipline, or profession

academic – n. a person who is a teacher in a college or university