Update Required To play the media you will need to either update your browser to a recent version or update your Flash plugin.
By Susan Shand
18 July 2021


Major Fannie Griffin McClendon never thought too much about being part of the only Black female United States army group to serve in Europe during World War II. Neither did those who served with her in the 6888th Central Postal Directory Battalion. The soldiers had a job to do.

The women are credited with solving a serious U.S. Army mail crisis during the war. Upon their return, they were seen as models for generations of Black women who would join the military. 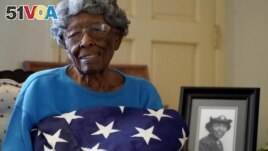 But overall, the efforts of the 855 service members have gone widely unrecognized — until recently.

In April, the U.S. Senate passed legislation that would award members of the battalion with the Congressional Gold Medal, one of the nation's highest honors. Now, the House of Representatives will consider the bill. However, even if it passes, it will be too late for much of the 6888th. Most of the soldiers have died. It is believed there are only seven surviving members.

One of them is McClendon. She spoke about the award from her home in Tempe, Arizona.

McClendon has met with her local congressmember to press for passage of the bill.

The 6888th was deployed to Europe in 1945. At the time, there was growing pressure to include Black women in the Women's Army Corps, or WACs. There was also a push to permit them to join the WACs white members overseas.

"I think that the 6888th, the command inherently knew that their presence overseas meant more than clearing the mail backlog," said Retired Army Col. Edna Cummings. She was not a member of the 6888th, but has been working to get them greater recognition.

They represented hope for Black women soldiers back in the United States who were facing racism and sexism in their military service, she said.

The 6888th was deployed to Birmingham, England. Its job was to process a huge collection of letters and other mail sent to troops and others who never received them. Many troops were angry about lost letters and delayed mail.

"They expected we were going to be there about two or three months trying to get it straightened out. Well, I think in about a month, in a month and a half, we had it all straightened out and going in the right direction," McClendon said.

At the time, the military was segregated, or divided by sex and race. Blacks could not share housing, eating places and other Army properties with whites. This forced the 6888th to set up all their operations on their own.

The 6888th began the project by dividing into three groups so that the work could continue around the clock. They created a locator system based on the names of soldiers and the number of their unit in which they served.

Each group of the 6888th could process about 65,000 pieces of mail during a single work period.

The women dealt with the backlog of mail, about 17 million pieces, in three months, two times faster than the Army expected.

Their effort was a major success. But the 6888th still dealt with criticism and questioning by those who did not want Black women to serve in the military.

The army group was deployed to France after they completed the mail project. And, when they finally returned home to the U.S. their service went unrecognized.

"It is sad to say. They came back to Jim Crow America," Cummings said, adding "there are so many stories of units of color who were not recognized until decades after the war."

Still, Cummings said the time overseas with the Army changed the lives of the women who served.

The 6888th's Elizabeth Barker Johnson is an example. She was the first female to attend Winston-Salem State University in North Carolina on the GI Bill, a law that provides free college education to returning soldiers.

McClendon took a different path, joining the Air Force after segregation in the military was ended. She became the first female to command an all-male unit with the Strategic Air Command.

Another member, the late Doris Moore, became the first Black social worker in the state of New Hampshire, her family said.

The 6888th is also the subject of a documentary. And there is discussion of making a movie based on the story of the 6888th. A monument honoring the soldiers was put up at Fort Leavenworth, Kansas in 2018.

And there is the hope of a Congressional Gold Medal.

"It is past time that we officially recognize them for their incredible contribution to our troops during World War II," said Maggie Hassan, one of the U.S. senators who proposed the Senate bill.

inherent – adj. belonging to the basic nature of someone or something

backlog – n. a large number of jobs that are waiting to be finished

locator - adj. showing the place where someone or something is

Jim Crow – n. the slang name for the laws that segregated Black people in the United States