Update Required To play the media you will need to either update your browser to a recent version or update your Flash plugin.
By John Russell
13 June, 2016


Brazil now faces its own Occupy Movement in public schools.

High school students have taken over more than 300 public spaces and formed committees to demand meetings with state officials.

Students want officials to investigate alleged misappropriation of money that had been earmarked for education. 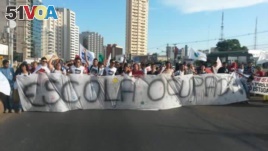 Students marching in the Brazilian state of Mato Grosso demand that a parliamentary commission of inquiry investigate alleged misappropriation and embezzlement of funds for education programs. (Photo – courtesy of Juarez Fran&#231;a)

The government has not said how many schools are occupied. But the movement, which started last year in Sao Paulo, has spread to Rio de Janeiro, Ceara, Para, Mato Grosso, and Rio Grande do Sul.

In Rio de Janeiro, the host city of the Summer Olympic Games, teachers have been on strike for more than three months.

Classroom conditions became so bad, she said, that students decided to occupy their high schools.

In a statement to VOA, a Rio education official said the department wants to have a dialogue with students, teachers, and other organizations.

"Teachers are not getting paid ... and these Olympic Games brought the state of Rio de Janeiro into the abyss," Adedoyin said.

The price of the 2016 Olympics in Rio de Janeiro rose 400 million reais, or $99 million dollars, between August and January.

The estimated total cost for the Olympics, including large infrastructure projects, is around 39.1 billion reais, or $11.5 billion dollars.

In Rio Grande do Sul, a state in the southern part of Brazil, more than 170 schools are occupied. Some schools have been closed for more than a month, students say.

Rio Grande do Sul officials sent a letter to students in occupied schools telling them to leave the school within 48 hours. The student association then filed a motion in the state's court, says Fabiola Logeurico, a director of communication at the High school union association.

Loguerico adds that students believe the state cannot take back the school, because it belongs to taxpayers.

"This is the first conversation we're having with officials... the government has presented guidelines and said they would help and accept our demands, but they do not give a deadline," Loguerico said.

Rafael Galvao, student and director of another student-led association, said the movement has just begun in the state of Para. There, students demand education reform, pest management to handle pigeon infestations in schools, and a school lunch program to benefit all students.

"So we are waiting. If they don't do what was promised, we will occupy again," Galvao said.

Earlier this month, Galvao visited a rural small town in Para. He said he was "touched" when he visited an occupied school that serves at least 1,200 students.

"It's sad. It looks like a prison... Without any structure, no food, no transportation. I held tears back when I heard the students' account," Galvao said.

Brazil's Ministry of Education spokesperson told VOA that because high schools are under the control of state governments, ministry officials prefer to "not comment at this moment."

alleged – adj. accused of having done something wrong or illegal but not yet proven guilty

misappropriation – n. to take (something, such as money) dishonestly for your own use

earmarked – v. to put (money) aside for a special purpose

host – n. a person (or city) who entertains guests

benefit – v. to be useful or helpful to (someone or something