Climate change may make parts of the Middle East too hot for human beings, according to a new study.

Researchers from the Max Planck Institute for Chemistry and the Cyprus Institute studied weather conditions in the Middle East since 1970. The researchers say "very hot" days in the area have doubled over that period. 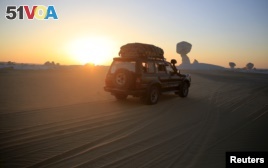 A four-wheel drive car crosses the Egyptian western desert and the Bahariya Oasis, southwest of Cairo in this picture taken May 15, 2015.

"In [the] future, the climate in large parts of the Middle East and North Africa could change ...," says Jos Lelieveld, director at the Max Planck Institute and a professor at the Cyprus Institute. He added that because temperatures could get so high, those living in the area could be at risk.

Researchers say temperatures in summer in the Middle East and North Africa will continue rising. The nights and days will be hotter, too.

Extreme heat could continue past the middle of the 21st century. Researchers think temperatures in the middle of the day could reach as high as 50 Celsius. Heat waves could increase, and those hot periods are likely to last longer.

"If mankind continues to release carbon dioxide as it does now, people living in the Middle East and North Africa will have to expect about 200 unusually hot days," says Panos Hadjinicolaou, a climate change expert with the Cyprus Institute.

The researchers also looked at the amount of "fine particulate air pollution" in the Middle East. They found that the amount of dust in the atmosphere over Saudi Arabia, Iraq and Syria jumped 70 percent since the start of the century. This, they say, could have resulted from an increase in the number of sand storms caused by climate change.

The researchers created two models. In one model, rising temperatures are limited because of reductions in greenhouse gases. Studies have linked production of such gases to rising temperatures. The other model is said to be a "business as usual" model where nothing is done to stop climate change.

Under both models, the future of the Middle East is not good, the researchers say. They added that climate change can result in a slow worsening of living conditions for people in North Africa and the Middle East. They also said sooner or later, many people may have to leave the region.

This story appeared on VOANews.com. Jim Dresbach adapted the story for Learning English. George Grow was the editor.

according – adj. as stated by or in

greenhouse gases – n. gases that trap heat in the atmosphere, which makes the Earth warmer