Update Required To play the media you will need to either update your browser to a recent version or update your Flash plugin.
By Bryan Lynn
22 September, 2019


Wyoming is, by far, the largest coal producing area in the United States. In 2017, mining operations across the state dug out more than 316 million tons of coal.

The town of Gillette, in the northeastern part of Wyoming, has a long history of coal mining. But in July, about 600 mine workers lost their jobs when the owner of two local mines went out of business.

Workers were shocked when the mines - two of the country's largest – closed halfway through a workday with no warning.

Melissa Peterson Worden was one of those workers. "It is the thing they said would never happen," she said about her job with the mining company Blackjewel. "And it happened."

On the morning of July 1, Blackjewel sought bankruptcy protection in court. But when the company failed to get emergency financing to keep operating, the mines closed down later that day. They have not re-opened since. 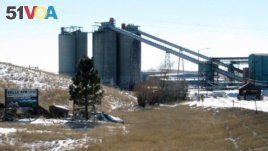 Blackjewel's bankruptcy is one example of the changes taking place in the U.S. electric power industry. Over the past 10 years, more than half of the nation's 530 coal-fired power stations have closed or announced plans to do so. That information comes from an environmental group, The Sierra Club.

The coal industry's problems have also affected other parts of the country, including Appalachia. Appalachia gets its name from the Appalachian Mountains. It is considered the center of America's coal industry.

The economic downturn has affected Wyoming less than Appalachia. One reason for this is because coal is very easy to mine in Wyoming's Powder River Basin. In this area, huge pieces of coal sit just below the Earth's surface.

Robert Godby is the director of the University of Wyoming's Center for Energy Economics and Public Policy. He said companies with mines in the Powder River Basin were thought to be safe from a downturn because the businesses were so profitable.

"But that's changed in a few short years," Godby said. "The tide has just turned so quickly that it's caught a lot of people off guard."

Some coal industry supporters blame former U.S. President Barack Obama for pushing environmental rules that led to the closing of plants that had operated for years.

But industry experts say the problems facing coal-fired plants today have more to do with the rise in popularity of natural gas over the past 10 years. They note that gas costs less than coal.

In addition, the cost of solar and wind power in the past few years has helped renewable energy further cut into coal's market.

One hope for the miners in Gillette is a project looking at ways to capture carbon dioxide produced by coal-fired power plants. Research has shown that rising levels of carbon dioxide in Earth's atmosphere are one cause of higher temperatures.

Many experts think carbon capturing could be an effective way to fight climate change. If the process proves successful, it could really help the coal industry.

The experimental project, called the Integrated Test Center, is being carried out at a power plant just outside Gillette. There, researchers can directly connect equipment to the plant's exhaust to test different ways to capture carbon dioxide.

However, the technology is still being developed and not expected to be widely available to power companies for several years.

Next year, the test center will be one of two areas taking place in the $20 million Carbon XPRIZE. The other area is in Alberta, Canada. Teams from around the world will compete to find the best way to turn the plant's carbon dioxide emissions into profitable products, such as building materials or chemicals.

Whether they win or lose, local officials in Gillette say they hope some of the teams competing for the prize will set up operations there.

bankruptcy – n. when a company goes out of business because it does not have enough money to continue

tide – n. an increase in something that is developing

renewable – adj. any naturally occurring source of energy, such solar or wind