Update Required To play the media you will need to either update your browser to a recent version or update your Flash plugin.
By Anne Ball
03 September, 2017


Earth's atmosphere is in trouble.

Most scientists warn that conditions will get worse unless something is done soon. 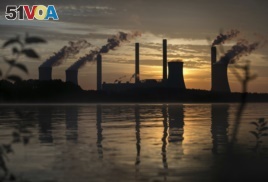 Among those trying to find a solution is a volunteer group of scientists and farmers in the United States. The group, called the Marin Carbon Project, says it has found a proven way to slow the rise in temperatures — and possibly reverse it.

John Wick and his wife own the Nicasio Native Grass Ranch in Marin County, California. He helped to set up the Marin Carbon Project.

Wick says the project could help save the world from climate change. He notes that when you stand in the sunshine on a nice day, it is hard to know the Earth is in trouble. 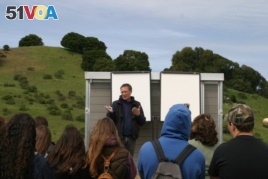 FILE: John Wick talks about carbon farming to a group of students at his Nicasio Native Grass Ranch in California..

What is that something he is talking about? Carbon farming. It uses processed compost to cool the Earth. The compost comes from cut grass, dead plants or other organic material, which have been shown to improve the soil.

Jeff Creque, an ecologist, developed a theory that processed compost can help control rising temperatures. He says what we need to do is increase the amount of carbon that agriculture captures.

Here is how Creque and Wick tested their idea. In December of 2008, they worked in a test area on Wick's ranch that had lost carbon from the soil. They covered the land with one and a quarter centimeters of processed compost. This area was next to another test area without compost. Farm animals lived on both plots of land. 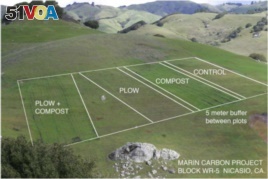 The two men wanted to see if the compost-treated land would pull carbon dioxide out of the atmosphere and take in carbon during photosynthesis. Photosynthesis is the process by which a green plant turns water and carbon dioxide into food when the plant is in the presence of light.

Creque says putting down compost just once on the farmland provided far better results than what they had expected. He says if you use this method across four million hectares of crop land, large amounts of carbon dioxide would be taken from the atmosphere. The gas would end up back in the soil and be kept there. 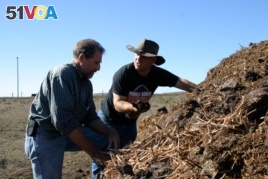 Creque explains that having the carbon dioxide in the ground would help the soil, working "to produce crops and to hold onto water."

"So, the water implications of this, particularly for a state like California - but really across the American West and much of the arid regions of the world - increasing soil organic matter what little bit of rain we do get - allows us to hang on to that and make better use of it."

Rancher John Wick is happy with the results of the Marin Carbon Project's experiments. He believes carbon farming could make a big difference, if the method was used by many people around the world.

"The implications of this globally are that we can actually cool planet earth, should increase production of food and fiber, fuel and flora in a way that actually enhances the resources. So the more you do, the more you can do. It's the most exciting thing ever."

But other people are not so sure about that.

Tom Hedt works for the U.S. government's Natural Resources Conservation Service (NRCS). He agrees that compost helps capture carbon in the soil and takes some carbon dioxide out of the air. But it is just one of many land management practices that NRCS advises to help both the soil and the air. Others include crop cover, less tilling -- or turning over the soil in between crop planting -- and planting trees and smaller plants. FILE: Here is an example of no-till farming. Trey Hill's no-till soybeans grow through what is left of the previous season's cover crop in Maryland.

Hedt says every plot of land is different. And he says more research needs to be done to know the effectiveness of carbon farming and whether the Marin Carbon Project's findings would be true in larger areas.

"It's an emerging issue. There are some people that are very excited about it. Yeah, there's dangers of taking a few plots and just doing the math. Multiplication is pretty easy, but the site-by-site prescriptions are much more complicated than that."

He says the findings show enough promise that last year, four-year long field trials were started on a number of range and grasslands throughout California. The 14 trials will run to test the use of compost for carbon farming on different kinds of lands.

Jan Sluizer reported this story for VOANews. Anne Ball adapted her report for Learning English. George Grow was the editor.

scary as hell – phrase. very frightening (hell is the place where the devil lives, according to some religions

ecologist – n. a scientist who deals with relationships between groups of living things and their environments

Keeling Curve – n. a graph that shows the ongoing change in concentration of carbon dioxide in Earth's atmosphere since the 1950s.

implication – n. what shows something or someone with close connections or involvement with something

flora – n. all the plants that live in a particular area, time, period, or environment

enhance – v. to increase or improve