Update Required To play the media you will need to either update your browser to a recent version or update your Flash plugin.
By VOA
04 June 2022

The English language has several expressions that describe things that happen very fast. Today we will talk about several. Some involve body parts. And some involve acts of nature.

Let's start with our bodies. 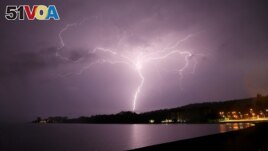 There are some things we humans we do very quickly – namely our blinking eyes and beating hearts. Those bodily actions happen incredibly fast. So, we use "in the blink of an eye" and "in a heartbeat" to describe things that happen in no time at all.

Here are some examples:

She accepted the new job in a heartbeat. She didn't need to think about it at all.

When he hit the lottery, all his money problems disappeared in the blink of an eye.

Now, some may say that "blink of an eye" is redundant. After all, the only part of the body we can blink are the eyes. So just saying "blink" is enough. She blinked and her friend was gone! But when we use the expression, we always say the word "eye."

We also don't think about blinking our eyes or beating our hearts – well, hopefully we don't. So, the expressions also mean that no thought was involved in the action.

Okay, now let's talk about the expressions from the natural world.

If you are very fast, we might compare you to two powers in nature: wind and lightning. These two are usually used in the form of a simile. A simile compares things using "like" or "as."

With lightning, we could also the words with a hyphen and say you are lightning-fast!

Also, when lightning happens, it happens as a flash of lightning or bolt of lightning. Both these words, flash and bolt, are also used to describe fast things.

If something happens in a flash, it happens at lightning speed. And if I bolt somewhere, I run very fast to get there. For example, when it started to rain, I bolted to my car!

Now let's hear some friends use these expression together. They are waiting for a third friend in front of a movie theater.

A: Hi! Thanks for coming to the movies with me.

B: I love movies! As soon as you texted, I responded in a heartbeat.

A: It's a good thing I came early and got tickets. They sold out in the blink of an eye. Hey, where's Steve?

B: He had some work to finish up. So, he might be a bit late.

A: Oh, look there he is now! Hey Steve! Looks like you ran all the way here.

C: I was running FROM work not TO the movies. So, what's the name of the movie anyway?

A: Lightning McGrady and the Race Against Time !

A: He's not just fast. He's lightning-fast! When he runs, he can slow down time. Hey, who wants popcorn or a drink?

B: There's no time! People are going in! You'll miss the trailers! And you love trailers!

C: Hold on. I'll go buy drinks and popcorn. After all, you bought the tickets. Just save me a seat.

A: Great Steve! Thanks!

blink – v. to shut and open the eyes quickly

lottery – n. a drawing of lots in which prizes are distributed to the winners among persons buying a chance

compare – v. to represent as similar

trailer – n. a short promotional film composed of clips showing highlights of a movie due for release in the near future