Update Required To play the media you will need to either update your browser to a recent version or update your Flash plugin.
By Faith Pirlo
29 September 2022

We considered how O'Brien used adjectives to describe Mrs. Frisby's physical appearance or how she looks. We thought about how Mrs. Frisby talks with other characters like Jeremy the crow or black bird by questioning him or how she used commands. Finally, we looked at her thoughts and memories.

In today's Everyday Grammar, we will finish our discussion about Mrs. Frisby, who is a field mouse and a mother. We will look at her actions and the effect she has on other characters. 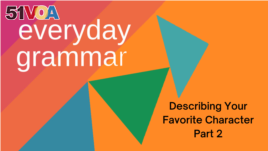 In one part of the story Mrs. Frisby helps to set Jeremy free from the string in which he is tied up. Here we see that Mrs. Frisby is hard at work, cutting through the string to help Jeremy.

As the characters talk, we realize why Mrs. Frisby is in such a hurry... Jeremy sees Farmer Fitzgibbon's cat named Dragon.

Mrs. Frisby showed courage through this experience. She was willing to help the crow escape from Dragon without any expectation that he would help her. She was selfless or not thinking about herself or her safety during this time.

Mrs. Frisby uses those sharp teeth to cut through the string. "Gnawing" is biting at something repeatedly. Some animals gnaw wood, for example, to sharpen their teeth.

Through these two descriptive verbs we can see Mrs. Frisby's actions very clearly in our minds. The verbs paint a picture of what she is doing.

The final way that we can describe our favorite character is looking at how other characters think about or act towards them.

Remember Jeremy's reactions to Mrs. Frisby when she is trying to help him?

"How?" said the crow dubiously.

"Don't argue. I have only a few minutes." She said this in a voice so authoritative that the crow fluttered down immediately.

To be dubious is to be unsure about something, to question an idea, maybe. To flutter is to flap the wings as quickly as possible. The word can suggest some fear or worry as well.

Jeremy's questioning of Mrs. Frisby's ability was very brief. She answered with a single command and he obeyed at once.

Let's finish our description of Mrs. Frisby below. The first four sentences are how we described Mrs. Frisby with her physical appearance, her thoughts and words.

For example, Mrs. Frisby saves Jeremy the crow from Dragon, the farmer's cat, by gnawing through a string. Jeremy is at first unsure about accepting Mrs. Frisby's help, but her command in the situation is undeniable. Jeremy does as she says and is rescued.

Write these sections down and send them to us at learningenglish@voanews.com.

We will look at a few descriptions and give some feedback in a future report of Every Grammar.

Describe your favorite character in the comments below or write to us at learningenglish@voanews.com.

character – n. a person (or animal) who appears in a story, book, play, movie, or television show

gnaw – v. to bite at something over and over

strand – n. a thin piece of hair or string

dubiously – adv. with uncertainty or hesitation

authoritative – adj. able to be trusted as being accurate or true