What Are Elliptical Structures?

Update Required To play the media you will need to either update your browser to a recent version or update your Flash plugin.
By VOA
28 July 2022


There is an important part of grammar that is common in writing and everyday speech. But unlike many other subjects in grammar, this subject is defined by what is not expressed.

What is this mysterious subject?

In today's report, we will explore elliptical structures. 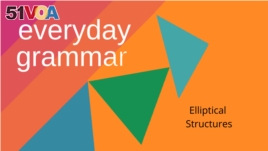 Let's start with a few important terms and ideas.

Clauses are groups of words with a subject and a predicate.

When part of a clause – generally part of the predicate - is left out but still understood, we get an elliptical clause.

Imagine you are watching an American television show. You hear the following:

Who is going to cook dinner?

In this case, the modal "will" appeared without a main verb. The complete statement is "I will cook dinner." The words "cook dinner" are understood between the speakers, although unspoken. This is a kind of elliptical clause.

Elliptical structures are a wonderful way to avoid repeating words. They can make your statements more natural or more complex. But they can also reduce clarity if used incorrectly.

The main problem with elliptical structures is that they depend on an absent part of a sentence being understood by the listener.

You already learned about an example of a verb phrase ellipsis – our example about cooking dinner. The verb phrase "cook dinner" was not expressed. All that remained were the words "I will."

What about a verb ellipsis, one that does not have a modal such as "will" or "can"?

One common way a verb ellipsis appears is in sentences with two or more independent clauses. These clauses are joined by a semicolon.

In this example, the verb in the second part of the sentence does not appear. This sentence replaces two statements:

Since the same verb form - "took" - repeats between the two statements, you can join them with a semicolon and remove "took" from the second part of the sentence. That is how we arrive at

This structure could be used in everyday speech or in formal writing.

Let's take some time to work with this idea.

Use the following nouns and verbs to make a sentence that uses an elliptical structure. You might have to add a few more short words such as the, a, or an.

Pause the audio and think of your answer before continuing.

But instead of repeating the same verb, we joined the two statements into one sentence that has a semicolon and a comma. That is how we arrive at:

Now let's try a different question. Use the following nouns, pronoun, and verb to make a sentence that uses an elliptical structure. You might have to add a few more short words such as the, a, or an.

Pause the audio and think of your answer before continuing.

This question was a trick question. You might think that the answer is this:

An elliptical structure might not be the best choice here.

So, we would have to use a different kind of sentence to express the idea. It could be, for example, "We prefer live music; Bob prefers live music."

The central idea in today's report is that elliptical structures suggest language but do not directly express it.

We will end this report with a question for you. We noted, but did not give an example of, a noun ellipsis. Can you think of an example? Write to us in the comments section of our website, www.51voa.com.

absent – adj. not present at a usual or expected place

imply – v. to involve or indicate by inference, association, or necessary consequence rather than by direct statement

independent clause – n. grammar: a clause that could be used by itself as a simple sentence but that is part of a larger sentence

prefer – v. to like better or best; to favor