Update Required To play the media you will need to either update your browser to a recent version or update your Flash plugin.
By Bryan Lynn
05 June 2021


Huge numbers of mice are threatening crops in eastern Australia.

In New South Wales state, officials have described the situation as a "plague" that has never been seen before.

The small animals have spread over wide areas of agricultural land across New South Wales and parts of the neighboring states of Queensland and Victoria.

In addition to eating grain crops, the mice have damaged farm and household equipment, caused power outages and invaded supermarkets.

Adam Marshall is the Agriculture Minister for New South Wales. He recently said the situation had reached "a critical point" and needed to be dealt with immediately to prevent further problems.

"If we don't significantly reduce the number of mice that are in plague proportions by spring, we are facing an absolute economic and social crisis," Marshall said.

Bruce Barnes talks in front of stored hay infested with mice on his family's farm near Bogan Gate, Australia on May 20, 2021. (AP Photo/Rick Rycroft)

The state's main agricultural organization predicts the mice could cause $775 million in losses.

The state government has ordered 5,000 liters of the banned poison Bromadiolone from India. But the federal government has not yet approved the substance for emergency use around crops. Critics fear the poison will kill not only mice, but also many other animals that feed on them, or family pets.

Marshall said the state wants to use the Bromadiolone "because we need something that is super strength."

Norman Moeris is another farmer in New South Wales. He grows several grains and raises 900 merino sheep on his farm near Gilgandra, about 430 kilometers northwest of Sydney. "This grain here, the mice have just totally ruined it. (We'll) probably just dig a hole and bury the lot of it," the 65-year-old Moeris told Reuters.

He said he had already lost $130,000 worth of grain to the mice. "It's just hard, after the drought, that's the biggest trouble," said Moeris. "We've been on our knees, we got up a bit, now we're back on our knees with the mice."

People in the area say the most activity comes after dark, when millions of mice that hide and rest during the day come out. But one of the biggest issues people have is the bad smell of mouse waste and decaying bodies. 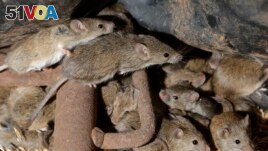 Mice scurry around stored grain on a farm near Tottenham, Australia on May 19, 2021. (AP Photo/Rick Rycroft)

"You deal with it all day...trying your best to manage the situation, then come home...to the stench of dead mice," said Jason Conn, a farmer in central New South Wales.

He said the mice are even getting in people's homes. "If your house is not well sealed, they're in bed with you. People are getting bitten in bed," Conn said.

plague – n. a serious disease that spreads quickly and kills a lot of people

proportions – n.(pl.) the size, shape or extent of something

the lot of –phrase all of; the whole of

decay – v. to break down over time

seal – n. to close off a container or area