Update Required To play the media you will need to either update your browser to a recent version or update your Flash plugin.
By Pete Musto
09 October, 2017


Would you buy a car that released calming smells into the air when you are stuck in heavy traffic?

Would you buy a robot that smells like a human being?

Scientists suggest that new technology means people will soon be using devices like these in their daily lives.

The British Science Festival took place recently in Brighton, England. At the event, researchers from the University of Sussex demonstrated some of the technology that might be coming soon.

Many people have seen the three-dimensional computer-made environments of virtual reality, known as VR. Now these virtual worlds will not just look and sound real. Researchers have created VR environments that even smell like the real thing. 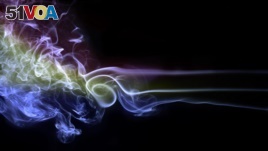 With the new technology, users open a virtual door and step into a new environment, like a rainforest. After they enter this virtual world, special equipment releases forest-like smells into the air to make the experience seem more real.

Suzanne Fisher-Murray saw the technology being demonstrated at the British Science Festival. She told VOA, "It is a really immersive experience that you have because you're exploring this environment and you have smells ... with it."

Smell technology has been tried in the past. In the United States, Smell-O-Vision was designed to provide smells during the showing of a movie. The Smell-O-Vision system was briefly popular in the 1960s. Now, University of Sussex researcher Emanuela Maggioni says it is close to becoming popular again.

"The connection with emotions, memories, and ... the sense of smell," Maggioni said. "It is incredible what we can do with technology."

The uses for smell technology are not just limited to films and the performing arts. Researchers also demonstrated a computer program where users could imagine themselves driving a car.

The system included a special smell-spraying device. Dmitrijs Dmitrenko is one of the researchers working on this project.

"In this demonstration," he said, "we wanted to deliver the smell of lavender every time the driver exceeds the speed limit. We chose lavender because it's a very calming smell."

Scientists are experimenting with using smell instead of sounds or image-based alerts on telecommunications equipment. And businesses are already using smell to influence people's behavior.

"Not only ... in stores ... But on the other side, you can create and stimulate impulse buying," Maggioni said. "So you're in a library and you smell coffee and actually you are unconsciously having the need to drink a coffee."

She adds that the sense of smell is important in human communication and relationships. For example, when men smell tears, it reduces levels of testosterone, a natural hormone in their bodies. Men then show greater feelings of understanding with other people.

That natural process has uses in new technology, Maggioni says. For example, she believes it could help people trust robots more if the robots smelled like humans.

We want to hear from you. What other new technologies which include smell do you think the world will see in the near future? Write to us in the Comments Section or on 51VOA.COM.

lavender – n. a plant with narrow leaves and small purple flowers that have a sweet smell

exceed(s) – v. to go beyond the limit of something

alert(s) – n. something, such as a message or loud sound, that tells people something is happening

stimulate – v. to cause or encourage something to happen or develop

impulse buying – v. the act or practice of buying things after feeling a sudden strong desire to do so

unconsciously – adv. doing something in a way where the person does not know they are doing it

tear(s) – n. a drop of liquid that comes from your eyes especially when you cry