Update Required To play the media you will need to either update your browser to a recent version or update your Flash plugin.
By VOA
23 January, 2017

Google Doodle, the image on the opening page for Google searches, shows a man using a wheelchair and breathing machine at the front of a classroom. The man is Edward Verne Roberts, an early activist for disability rights in the United States.

Birth of an activist

When he was 14 years old, Roberts became ill with polio and was paralyzed from the neck down. He had to sleep in an iron lung at night and rested in it during the day.

Breathing on his own was not easy: he had to gulp air using his mouth and throat muscles.

Roberts went to high school by telephone until his fourth year, when his mother asked the school to let him come in person. Other students stared at him, but he decided it was because he was like a "star" – different from the other students.

At first, the high school said he could not graduate because he did not take the classes in physical education or driving a car. Roberts' career as an activist began when he fought for the right to graduate without those classes.

Roberts was the first severely disabled student to attend the University of California at Berkeley.

That was not easy, either.

School administrators thought Roberts would never be able to get a job, so he had no reason to attend the university. He also had to fight for a living space where he could use his iron lung.

Eventually, part of the university's hospital was opened to him. Soon other disabled students were able to move into the space and attend classes.

Roberts earned a Bachelor's Degree from Berkeley in 1964 and a Master's Degree in Political Science in 1966.

The MLK of the disability rights movement

Roberts and the other disabled students at Berkeley formed a support group. They called it the Rolling Quads. "Quads" is a shortened word for "quadriplegic," a person who has paralysis in both arms and both legs.

The people around them were surprised that the Rolling Quads had a positive view of being disabled. The group's positive message and successes led to more activism for the disability rights movement in the wider community. 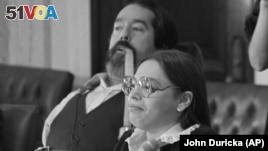 Judy Heumann and Ed Roberts, left, Director of the California State Department of Rehabilitation in a Washington news conference Thursday, Oct. 21, 1982 to call attention to the lack of funds by the Reagan administration for their program.

Roberts was an early leader of the Center for Independent Living in Berkeley and is seen as the father of the Independent Living movement. It is an international movement of people with disabilities. They are working for equal opportunities, self-determination, and self-respect.

In 1976, California Governor Jerry Brown appointed Roberts as Director of the California Department of Vocational Rehabilitation. This agency had once said Roberts was too disabled to work. He worked there until 1983.

Roberts died of a heart attack in 1995 at age 56. His wheelchair is in the Smithsonian Museum. It was donated by his friend Mike Boyd, who called Roberts "the Martin Luther King Jr. of the disability rights movement."

disability - n. a condition (such as an illness or an injury) that damages or limits a person's physical or mental abilities

polio - n. a serious disease that affects the nerves of the spine and often makes a person permanently unable to move particular muscles

paralyze - v. to make (a person or animal) unable to move or feel all or part of the body

iron lung - n. a form of medical ventilator that enables a person to breathe when normal muscle control has been lost

gulp - v. to eat or swallow (something) quickly or in large amounts

stare - v. to look at someone or something for a long time often with your eyes wide open

quadriplegic - n. a person who is permanently unable to move or feel both arms and both legs because of injury or illness

self-determination - n. the freedom to make your own choices

Now it's your turn. Do disabled people have equal rights where you live? What are they doing to get equal opportunities to work and get an education? Write to us in the comments section or on 51VOA.COM.