Spread of Disease Linked to Sandstorms in Sahel

Update Required To play the media you will need to either update your browser to a recent version or update your Flash plugin.
By Pete Musto
04 August, 2016


Sandstorms are a major part of life in the Sahel area in Africa.

The Sahel stretches from Senegal to Ethiopia. The area is also called the "meningitis belt" because of high levels of the disease meningitis that exist there.

Now, new research suggests sandstorms may be the cause of the high number of bacterial meningitis cases each year in the Sahel. 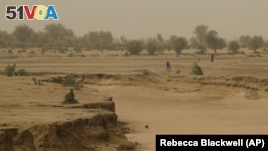 People walk past a dry seasonal riverbed in the Matam region of northeastern Senegal.

British and Belgian researchers think high winds from the storms are to blame. They say the winds force sand, other small particles and the bacteria that causes meningitis deep into the respiratory tract.

Researcher Daniel Neill is with the Institute of Infection and Global Health at the University of Liverpool. He says it is common for people all over the world to have bacteria in their breathing passages. He notes it is usually safe.

"But what's very rare is for these bacteria to move from ... the nose and mouth and throat to places like the brain, lungs or bloodstream where they cause severe disease," Neill adds. "We were able to show ... that the dust [increases the chances] of the bacteria moving from the mouth, nose or throat [to] the sites where they causes severe infection."

Over the past 10 years, there have been about one million cases of bacterial meningitis in the Sahel, he says. This resulted in about 100,000 deaths.

Neill and the other researchers reported their findings in the Journal of Allergy and Clinical Immunology.

The group spent eight years studying dust storms in the Sahel, an area with 26 countries and 300 million people. The main country they studied was Niger.

The researchers studied periods of visibility during the storms. They measured levels of sand and other particles in the air. They found the lower the visibility levels, the more cases of meningitis there were.

Researchers believe sand debris is the problem. During a dust storm, the debris causes irritation to the inside of the nose, mouth and throat. The irritation makes it easier for bacteria to enter the rest of the body.

Neill adds that the hot climate in the Sahel causes bacteria to release toxins. These substances make it harder for the body's natural defenses to fight infection.

Antibiotic drugs and vaccines have reduced the number of meningitis cases, he says. But the number might be reduced even more if people going out in the storms covered their faces with scarves or gauze material.

"And that's something that we could test relatively simply," Neill adds.

Dust storms most often happen during the Sahel's dry season, the hottest part of the year. By studying climate conditions, Neill says, it may be possible to predict when the most dangerous storms are likely to strike.

Jessica Berman reported on this story for VOANews. Pete Musto adapted it for Learning English. George Grow was the editor.

We want to hear from you. Does the weather in your country cause people to be sick? How can medical professionals prevent these problems? Write to us in the Comments Section or on 51VOA.COM.

sandstorm(s) – n. an event in which very strong winds blow sand around very forcefully in the desert

respiratory tract – n. the lungs or other organs used in the act or process of breathing

throat – n. the tube inside the neck that leads to the stomach and lungs

visibility – n. the ability to see or be seen

irritation – n. to make part of your body sore or painful

toxin(s) – n. a poisonous substance and especially one that is produced by a living thing

scarf(scarves) – n. a long piece of cloth that is worn on your shoulders, around your neck, or over your head

gauze – n. cloth so thin that you can see through it