Update Required To play the media you will need to either update your browser to a recent version or update your Flash plugin.
By Bryan Lynn
31 May, 2016


Up to 700 migrants are believed to have died in the past week crossing the Mediterranean Sea, the United Nations said Tuesday.

At least three boats sank in the biggest death toll for migrants in more than a year, the United Nations Refugee Agency (UNHCR) said.

The boats left Libya and were trying to reach Italy. Most of the migrants came from Africa. 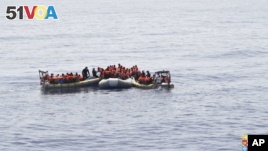 This undated image made available Monday, May 30, 2016 by the Italian Navy Marina Militare shows migrants being rescued at sea. Survivor accounts have pushed to more than 700 the number of migrants feared dead in Mediterranean Sea shipwrecks over three days in the past week, even as rescue ships saved thousands of others in daring operations. (Italian Navy via AP)

About 14,000 people were rescued in calmer seas since Monday, Reuters news agency reported. Survivors who arrived in Italy said one of the boats was carrying many women and children.

The migrants pay smugglers to take them on small rubber boats or old fishing vessels. Many do not know how to swim and do not have life jackets.

Giovanna Benedetto is with the humanitarian group, Save the Children. She said the survivors spoke about horrible conditions on the boats.

"They lived [in] terrible situations. They told us terrible stories. They saw killing people – only because those people want to have some food. Their stories are really, really terrifying."

The U.N. announced Tuesday that more than 2,500 migrants have died trying to cross the Mediterranean Sea into Europe so far this year.

The trip from North Africa to Italy is the deadliest way to cross, according to UNHCR spokesman William Spindler.

"2,119 of the deaths reported so far this year have been among people making this journey, making the odds of dying as high as one in 23," he said.

Most migrants traveling this way are from Nigeria and Gambia. Spindler said the migrants are risking everything to make the trips because they face very desperate conditions at home.

"The reason why so many people are taking to sea at the moment, and risking their lives, is because they have no option. We have to give them the possibility to travel legally and safely."

smuggler – n. a person who illegally moves people or things from one country to another

journey – n. the act of traveling from one place to another