Update Required To play the media you will need to either update your browser to a recent version or update your Flash plugin.
By Christopher Jones-Cruise
29 April, 2016


A new report says freedom of the press declined worldwide last year to its lowest point in more than ten years.

Freedom House, a group that supports freedom and democracy, said only one person in seven lives in a country where reporters' safety is guaranteed, and where media are not restricted or pressured by the government.

The report says media freedom worldwide has declined for the past 12 years. Jennifer Dunham of Freedom House described several reasons for the decline. 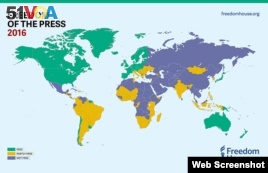 Powerful media owners and armed militants pressure reporters to support political groups rather than to report objectively on all groups.

And dictators and other anti-democratic political leaders are trying to stop independent reporting.

The most dangerous subjects to write about include corruption, land development, religion, and crimes committed by organized groups.

Reporting from areas of conflict and war

Ms. Dunham says reporting from areas where conflict or wars are taking place has become so dangerous and deadly that reporters struggle to get information from those places.

"In Syria and Iraq, we do see just reporters having to risk their lives to get any type of news whatsoever. And, you know, Syria was the place with the highest number [14] of journalists deaths in 2015." 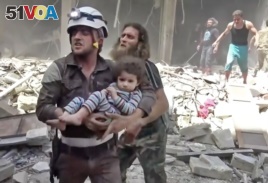 In this image made from video and posted online from Validated UGC, a Civil Defense worker carries a child after airstrikes hit Aleppo, Syria, April 28, 2016.

Reporters' lives are also endangered in nations with high crime rates. These nations include Mexico and some Central American countries, where local officials are paid bribes by powerful groups of criminals that grow, sell and transport illegal drugs.

Freedom is also limited in cyberspace. Many countries limit access to websites that may report criticisms of their governments.

And China has more reporters in prison than any other country. Officials there are also starting to examine more closely reporting on the economy and other subjects that were at one time considered safe to report on.

"There's government bans on certain topics that journalists choose to override, and choose to report on anyway, or choose to try to do investigative reporting on certain taboo subjects, like corruption of influential people."

The Freedom House report says journalists throughout the world refuse to stop trying to get information and report about it even though they face intimidation, danger and even death.

Russia is one of the countries that make life difficult for reporters. Russia often stops foreign reporters from entering areas it controls. Russia and other countries want people to know only their position on events, not the complete truth.

Media experts say press freedoms in Russia have been weakened by President Vladimir Putin. They say his government has increased state ownership of and influence on media. And it has restricted reporting that is critical of the government. 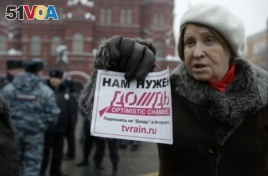 FILE - A protester holds a flyer reading "We need Dozhd" during a rally in support of the independent television station Dozhd (TV Rain), in Moscow, February 8, 2014.

However, one station in the Russian capital -- TV Rain -- remains independent. The privately-owned station is one of the few broadcasters in Russia that regularly reports criticisms of government policies.

"We're not a politically-motivated network. We don't really see it as our goal to, you know, to challenge the political establishment or anything like that. You know, we just try to be as objective as we can and, and, and that's really what we're about."

Many of the employees of TV Rain decided to work there because it was independent of the government. Some of them left other television stations as the government increased its control. Shanetskaya is one of them.

"Because I actually quit RT (Russia Today) about a month before the Crimea events. I just had a feeling that things there were tightening in a very uncomfortable way. And, as somebody who was there from the beginning, I found that disturbing."

But refusing to report only positive news about the government, like state media do, has hurt TV Rain. The station reported criticisms of Soviet military strategy during World War II. The government didn't like the story, and pressured cable companies to drop the channel in 2014.

Many people believe the government was looking for any reason to take action against the station. They include Ilya Klishin, the chief of digital media at TV Rain.

"I sincerely believe that if it was, wasn't that story about, like, the siege of Leningrad they would find something else. Like, it was just a matter of days or weeks."

In an attempt to survive, TV Rain began putting its programs online for people who paid a fee. Seventy thousand people now pay to see the programs, and its website gets millions of page views every month.

But Klishin says TV Rain, like all Russian media, is being restricted by the government in what it can report.

partisanship – n. strong support for a particular leader, group or cause

objectively – adv. based on facts rather than feelings or opinions

override – v. to ignore; to defy; to make (something) no longer valid

taboo – adj. not acceptable to talk about or do

contradict – v. to say the opposite of (something that someone else has said); to deny the truth of (something)