Do Pigs Like Music? Belgian Researchers Want to Know

Update Required To play the media you will need to either update your browser to a recent version or update your Flash plugin.
By Caty Weaver
30 July 2022


Scientists in Belgium are investigating a farmer's claim that different kinds of music affect the behavior of his pigs.

Piet Paesmans first noticed the reaction when his son started singing a song in the family's animal shelter. The farmer said the sows, or adult female pigs, seemed excited by the sound and started shaking their little tails.

"I thought this was too good to pass up, we should try that with the other pigs too," Paesmans told Reuters from his farm. 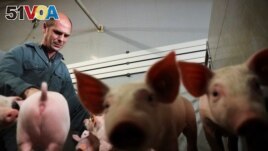 Paesmans has since created a list of songs to play at different times of the day. He uses energetic music when he wants the pigs to be active and lullabies at the end of the day. Lullabies are quiet, slow songs.

"Jolly dance songs are the biggest hits," Paesmans said. He said that the pigs even appear to dance to the music.

He does not play rock and roll music for the pigs. "Rock music is too strong, they don't like it," the farmer observed.

The farmer described his observations to a team of researchers. The team then secured 75,000 euros of financing to investigate the claims.

Sander Palmans is the research project organizer. He said not much is known about pigs' reaction to music. But he said that Paesmans' experience fits with existing knowledge about the effects of sounds on animals.

"There is without a doubt an effect of specific noises on animals," he said. "So it's really possible that music can have the same effect," Palmans added that music could help ease boredom, which has been linked to tension in animals.

The findings could be useful for the farming industry. Meat quality is affected by stress in animals, Paesmans said.

"A top athlete needs to be completely fit physically, but also mentally. And that's just the same for pigs...It's really important for the quality of the meat."

The results of the research are expected by the end of the year.

doubt –n. a reason for disbelief

specific –adj. relating to or being an example of a certain kind of thing

boredom –n. the state of being weary and restless through lack of interest

athlete –n. a person who is trained or skilled in exercises, sports, or games requiring physical strength, agility, or stamina