Update Required To play the media you will need to either update your browser to a recent version or update your Flash plugin.
By Faith Pirlo
26 July 2022


In Ukraine, young people are holding dance parties to help rebuild damage caused by the war with Russia.

In the northern Ukrainian village of Ya-hid-ne, a dance party, called a rave, took place among the destruction from the Russian occupation just months before. A rave is a large party with techno dance music.

The dance party had more than one purpose. It provided a way for almost 200 young people, mostly in their 20s and 30s, to help rebuild their country. The party was called a "clean-up rave" and it took place during the daytime instead of at night. 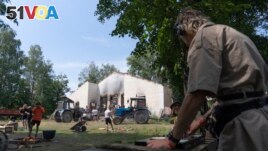 A music DJ at work while young volunteers clear debris from a building destroyed by a Russian rocket in the village of Yahidne, Ukraine, July 24, 2022. (AP Photo/Roman Hrytsyna)

Young Ukrainians are organizing the parties to help with recovery efforts in Ukraine's northern area, which suffered major damage during the Russian attack.

The volunteers used shovels to move debris from the bombed cultural center near the edge of the village of Yahidne. The center was destroyed by a Russian rocket in March.

Oleksandr Buchinskiy is a DJ, a person who plays recorded music as a job. He placed his record turntables on boxes of ammunition. As he played the music, some of the volunteers take a break from working to dance.

Tania Burianova is 26 years old and is the organizer of Repair Together Initiative, a group that brings together volunteers to help on the recovery projects. She enjoys electronic music and used to go to parties. "But now it's wartime and we want to help, and we're doing it with music. Volunteering is my lifestyle now," she said.

With the Russian invasion of Ukraine starting in February, came the sudden end to Ukraine's lively club and music activities. In the Ukrainian capital of Kyiv, there is a nighttime curfew because of the threat of rocket attacks. People who loved Ukraine's party culture wanted a way to enjoy the fun and freedom of music and dance, but also to help rebuild the country they love.

Burianova said that clean-up raves create a sense of normal life for those who lost their nightlife communities during the war. It also gives them a chance to help.

She told the Associated Press, "We miss (parties) and we want to come back to normal life, but our normal life now is volunteering."

During the Russian occupation, nearly all the population of Yahidne, just over 300 people, lived in a basement, or underground room, for weeks.

Nina is a 68-year-old who lives in the village, which is in the northern area of Chernihiv. She said that she spent weeks in the basement. She added that 11 people died there because of the poor conditions. She said that she was thankful to see the young people coming to help with the recovery efforts.

Nina spoke about the volunteers. "They already repaired our windows, doors and entrances. We could not do it ourselves with our salaries or pensions. I'm thankful that they helped us."

Most of the volunteers come from Kyiv, which is about two hours away by car. Others have come from nearby Chernihiv or further away from the western city of Lviv. In addition, some of the volunteers have even come from other countries, including Portugal, Germany, and the United States.

The clean-up at Yahidne's cultural center was Repair Together's eighth project, and the group helped to repair 15 homes in the village. Burianova said that the group wants to grow and have a building camp event in the town of Lu-ka-shiv-ka nearby. They will build 12 houses for people who had their homes destroyed.

Buchinskiy said that a feeling of hopefulness and responsibility connected the volunteers although they feel pain, sadness, and anger from the war.

He said, "These are all young people that still have a passion for life..."

And he added, "They feel a need to take part in this historical moment, and help people, and make Ukraine a better place with a smile on their faces."

Justin Spike wrote this article for The Associated Press. Faith Pirlo adapted it for Learning English.

techno – n. a type of electronic dance music that has a fast beat

shovel – n. a tool with a long handle that is used for lifting and throwing dirt, sand, snow, etc.

debris – n. pieces that are left after something has been destroyed

turntable – n. the part of a record player that turns the record

curfew – n. an order or law that requires people to be indoors after a certain time at night

passion –n. a strong feeling of enthusiasm or excitement for something or about doing something