Update Required To play the media you will need to either update your browser to a recent version or update your Flash plugin.
By Bryan Lynn
25 July 2022


Myanmar's ruling military has executed four democracy activists whom the government had accused of carrying out "terror acts."

The government confirmed Monday it had completed the executions, the first to be carried out in the country in more than 40 years. The action led to widespread condemnation from human rights groups and members of the international community.

The four men were accused of helping a resistance movement fight Myanmar's military government. They were sentenced to death during trials held in January and April. They were activists. The trials were not open to the public. 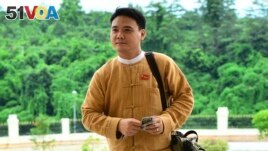 In this file photo, Phyo Zeya Thaw arrives at the Myanmar parliament in Naypyitaw, Myanmar, on Aug. 19, 2015. (AP Photo, File)

The military took power on February 1. The seizure came just as lawmakers were to take their seats in parliament. Elections had been held the November before. Military officials said the election was dishonest and the overthrow was necessary as a result. The country's electoral commission had rejected the army's claims of wrongdoing.

Among those executed was democracy campaigner Kyaw Min Yu, better known as Ko Jimmy, the country's Global New Light of Myanmar newspaper reported. The 53-year-old was a longtime democracy activist in the country. He had already spent more than 12 years in detention for political activism before his arrest in Yangon last October.

Kyaw Min Yu had been put on a wanted list for social media postings that the military government claimed led to unrest. State media said he was accused of terrorist acts including mine attacks and heading a militant group called the Moon Light Operation.

Also executed was 41-year-old Phyo Zeya Thaw, a former lawmaker and hip-hop music artist. The government ordered his arrest in November based on information from people detained for shooting at security force members, state media reported at the time.

Phyo Zeya Thaw was a close ally of Myanmar's ousted civilian leader, Aung San Suu Kyi. He was jailed in 2008 under a past military government after being accused of having illegal contacts and owning foreign currency.

The two others executed were Hla Myo Aung and Aung Thura Zaw. Both of them were sentenced to death in April for the March killing of a woman accused of being an informant for the military, the army chief said in an online statement.

Aung Myo Min is the human rights minister for the National Unity Government. The group is a civilian administration established outside of Myanmar after the military seized power.

The organization rejected the accusations that any of the men executed were involved in violence. "Punishing them with death is a way to rule the public through fear," Aung Myo Min told The Associated Press.

The U.S. Embassy in Myanmar said it mourned the loss of the four men and expressed sorrow to their families. It criticized the decision to execute them. "We condemn the military regime's execution of pro-democracy leaders and elected officials for exercising their fundamental freedoms," the embassy said.

Elaine Pearson, acting Asia director of Human Rights Watch, told The Associated Press the legal process against the four had been politically driven and were "grossly unjust."

Thomas Andrews is an independent United Nations-appointed expert on human rights. He had condemned the decision to go ahead with the executions when they were announced in June.

Andrews called for a strong international reaction to the executions. "These individuals were tried, convicted and sentenced by a military (court) without the right of appeal and reportedly without legal counsel, in violation of international human rights laws," he said.

The last judicial execution to be carried out in Myanmar is generally believed to have been of another political prisoner, student leader Salai Tin Maung Oo, in 1976. That execution happened under a past military government.

regime – n. a system of government or other control, especially one that people do not approve of

fundamental – adj. relating to the most important or main part of something

convict – v. to decide officially in a court of law that someone is guilty of a particular crime