Update Required To play the media you will need to either update your browser to a recent version or update your Flash plugin.
By Matthew Caputo
25 July 2022


Mennonite farming communities in southern Mexico are becoming a concern for the Mexican government. They are clearing areas of the Maya Forest, the largest tropical forest in North America.

Mennonites are Christians who live a simple life and reject some modern technology, including cars, televisions, radios and other electronic devices.

Global Forest Watch is a non-profit organization that looks at deforestation. It said the Maya Forest is shrinking every year by nearly 900 square kilometers. 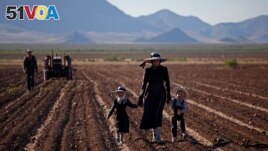 A woman walks with her two children through an agricultural field in the Mennonite community of El Sabinal, Ascension, Chihuahua, Mexico, April 29, 2015. (REUTERS/Jose Luis Gonzalez )

The Mennonites say that expanding their farms to provide a simple life for their families is the will of God.

Isaak Dyck Thiessen is a farmer and leader in the Mennonite settlement of Chavi. He said his people want to be left in peace.

Mennonites expanded into remote parts of Mexico after first arriving from Canada in the early 20th century. Agriculture work is central to their way of life and their religious beliefs.

The Mexican government once welcomed their farming expertise. But the Mennonites' farms are causing environmental problems in the Maya Forest, one of North America's biggest carbon sinks and a home to endangered jaguars. A carbon sink is an area with a strong ability to take in carbon dioxide from the atmosphere.

When they are not working, Mennonites do not use electricity and other modern technology. However, their farming has developed to include machinery like bulldozers and chainsaws to clear land, as well as tractors and harvesters for their crops.

Mennonites arrived in Mexico's Campeche state in the 1980s. In the last 20 years, nearly one-fifth of the state's tree cover has been lost.

The Mennonites keep an uneasy peace with local native communities. The native, or indigenous, Maya communities guard the surrounding forest but also borrow equipment from Mennonites for their own land.

"With them, we began to have access to machinery. We see that it gives us results," said Wilfredo Chicav, a Maya farmer.

Between 2001 and 2018, the three states that make up the forest in Mexico lost about 15,000 square kilometers of tree cover. This is driving a shorter rainy season. Less forest means less rainfall capture.

Mennonites are not the only ones harming the forest. Other groups, including palm oil farmers and cattle ranchers, also carry out widespread land clearance.

Not all the communities signed up.

Leader Dyck Thiessen and a lawyer representing some communities and farmers said Mennonites felt attacked by the government's efforts.

Mennonites believe in taking a pacifist approach to conflict. Pacifists oppose war or violence as a way of dealing with disputes.

The lawyer said at one meeting last year, a senior official at the federal environment ministry warned villagers the military could be brought to the area to stop deforestation if the communities did not change their ways.

Reuters reporters asked the environment ministry about the official's comments. The ministry denied talking about using the military, saying the government operates peacefully.

Carlos Tucuch is head of the Campeche office of Mexico's National Forestry Commission (CONAFOR). He told Reuters the government was not only centered on the Mennonites. The government, he said, was also looking into other causes of deforestation.

Campeche's Environment Secretary, Sandra Laffon, said the Mennonites in the state did not always have the right paperwork to turn the forest into farmland.

The agreement signed last year created a permanent working group between the government and Mennonite communities. The group will try to resolve complaints against the Mennonites from other local people.

Mennonite leaders are seeking a proposal from the government that would not cut their production. However, lower production may be something the farmers, including Mennonites, must deal with to protect the environment, Laffon said.

Dyck Thiessen, the Mennonite leader, does not think the government's proposed methods will be successful.

Still, he has hope.

"If the government shuts us down," he says, "God will open for us."

rancher -n. a person who lives or work in a large farm

approach - n. a way of dealing with something

pacifist – n. someone who believes that war and violence are wrong and who refuses to participate in or support a war