Update Required To play the media you will need to either update your browser to a recent version or update your Flash plugin.
By Dan Friedell
31 August, 2016

Researchers at a university in Hungary say there is truth to what many dog owners always believed.

Dogs do understand what humans say. 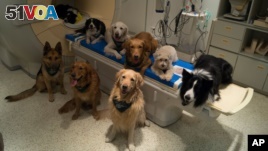 The researchers made images of the brains of 13 dogs using a machine that records brain activity.

The dogs were trained to lie down in the machine for seven minutes. During that time, they listened through headphones to their trainers' voices.

Dog owners may think the news is not surprising. But scientists are impressed.

Brian Hare is a professor of evolutionary anthropology at Duke University. He called one of the findings a "shocker."

The study showed dogs understand words and how they are said. Meaningful words said in a neutral way did not have the same effect as the same words said in an encouraging way.

Attila Andics was the lead researcher on the project.

"Dog brains care about both what we say and how we say it," he said.

Researchers say they think dogs are tuned in to what people say because dogs have lived with people for a long time.

Andics said he thinks other animals probably can understand human language like dogs do. But those animals are not very interested in what humans have to say.

People reacted to the story on Facebook and Twitter. They said they always knew their pets could understand them. And they were happy to see scientific support for what they experienced every day.

One reader from Virginia said she thought her dog could probably read her mind, too.

Someone in California joked that he always knew his dog ignored him.

And Greg Matos in Boston called the study "fascinating!"

evolutionary – adj. the way things change due to a natural process over a long period of time

tune in – v. to understand and be aware of a situation, other people's needs