Update Required To play the media you will need to either update your browser to a recent version or update your Flash plugin.
By John Russell
08 August, 2017


Like many American high school students, Josh Leong used to eat breakfast while it was still dark outside.

But that changed when his high school, McLean, in the American state of Virginia, changed to a later start time two years ago.

The issue of school start times has become increasingly important in recent years. A growing number of sleep research studies have pointed to high schoolers' need for more sleep. 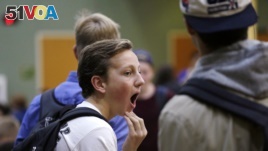 FILE - In this photo taken Nov. 23, 2015, sophomore Ben Early yawns as he stands in his school cafeteria before classes at Roosevelt High School in Seattle. In 2016, the American Medical Association issued a new policy proposal that "encourages middle schools and high schools to start no earlier than 8:30 a.m." (AP Photo/Elaine Thompson)

The American Psychological Association, or APA, says that more than half of teens between ages 15 and 17 sleep for 7 or fewer hours per night.

Teens like to stay up at night. They tend to go to bed late and wake up late in the morning. These habits are a result of biology, according to the APA.

Changing the sleep schedule of teens may not work. "Simply going to bed earlier does not necessarily make someone less tired in the early morning hours," says a statement on the organization's website.

The American Medical Association, or AMA, has also advocated for later start times.

In 2016, the group issued a new policy proposal that "encourages middle schools and high schools to start no earlier than 8:30 a.m."

While the medical community has largely supported later start times, Americans do not always agree on the issue.

American schools are separated into districts. According to the U.S. Census bureau, there are over 14,000 school districts in the country. Each district has its own governing body, which sets school start and end times, and other important school policies.

Some have opposed the adoption of later times on the grounds that after-school sports will suffer. The Atlantic reports on strong opposition to later start times in the American state of New Jersey.

"It seems like there's a disconnect here between the people who are making the decisions and the kids who actually want to play sports," said Rich Perello, a parent and opponent of later start times.

Gregg Lindner is a school board director in the Unionville-Chadds Ford school district in the state of Pennsylvania. He voted against the adoption of later start times.

Lindner says he believes the scientific evidence about the benefits of later start times. But, he said, it would have been better for the district to adopt the later start time after careful consideration. He felt there was "a rush to implementation."

Lindner's main concern was logistics. Logistics refers to the things that must be done to plan and organize a complicated activity or event that involves many people.

Many teachers live outside the district. Later start times mean they might have to travel during peak traffic times. In addition, many of the teachers have children themselves. Their children might study in different school districts that have different start times.

"It [the adoption of a later start time] is impactful," Lindner noted.

Lindner said he would have preferred adopting later start times in the 2018-2019 school year, instead of the upcoming 2017-2018 school year.

Phyliss Payne is the implementation director for Start School Later, an advocacy group. She agrees that school districts can, and should, plan for these logistical problems.

Payne notes that Americans already expect change in school schedules when their children move from elementary to middle and high schools. American districts often have different start times for each of these types of schools.

"The biggest challenge is that people do not like change... we like to protect ourselves from change. So, when we hear that something new is coming, our immediate gut reaction is to say ‘I don't want this, this is going to be bad' and we speculate about what's going to be different and how it is going to be hard for us."

"The definition of 'later' varies from culture to culture. When I talk to friends who have lived in England, for example, who then come back here after having the high school experience in England, they are very shocked at how early we [Americans] start, how short of a time we give the kids for lunch. There are interesting cultural differences."

Sleep experts – notably in the UK – have called for school start times as late as 10 or 11am, according to the Guardian.

Josh Leong, the student at McLean High School, likes his school's new start time of 8:05 am.

He said, "If you get a good night's sleep, your next day at school is significantly better."

John Russell wrote this story for Learning English. Hai Do was the editor.

district – n. US: an area or region containing the schools that a school board is in charge of

disconnect – n. a separation of (something) from something else; breaking of a connection between two or more things

rush – n. a situation in which someone is doing something very quickly or hurrying

logistics – n. plural the things that must be done to plan and organize a complicated activity or event that involves many people (ie transporting many students to school)

impactful – adj. having a major impact or effect.